Personal Documentary and the Collective Subject 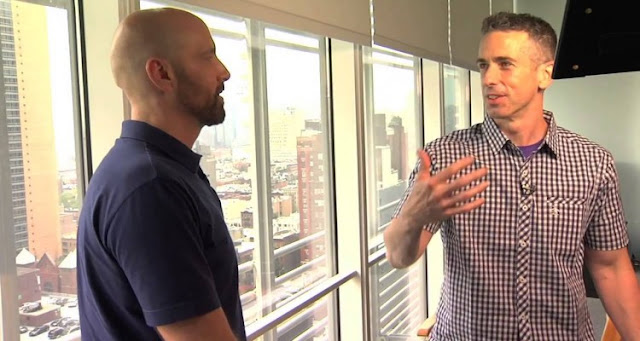 Do I Sound Gay?
dir. David Thorpe, 2015, US
Genre: Personal, issue documentary
currently in theaters in the US; available cable on-demand (US)

After watching Do I Sound Gay? I wondered if I saw the same film that Clayton Dillard did for his Slant Magazine review. On a literal level, yes, but I had a very different take than this impression:

Do I Sound Gay? is another link in an increasingly tiresome chain of navel-gazing think pieces posing as personal documentary.... Thorpe's approach is less historical or experimental than staid and solipsistic, as his own biography, which includes growing up in South Carolina and not acknowledging his own homosexuality until reaching college, is dutifully presented as a series of facts and tidbits which are meant to substantiate the film's interest in cultural norms regarding homosexual behavior and self-acceptance.

Part of me understands where the review is coming from. I'm not always fond of personal documentaries and for instance dislike ones like My Architect where the more broadly interesting subject matter is deflected toward personal emotional therapy of the filmmaker. And like or dislike the genre, there's a real aesthetic dilemma in the choice to make the filmmaker a character: is the showmanship and box office hook of a personal story worth losing some of the objectivist dimensions (or just aesthetic evocativeness) that documentary can excel at?

But the other part of me has to ask: who are you calling solipsistic? The plural of anecdote is data, but Do I Sound Gay? has as a reasonable a claim as any personal or portrait documentary that its main subject represents something broader, much broader. The very point of the film is that the personal is political. Falling back on "critical, scholarly, or journalistic investigation" would be interesting (one can imagine any number of ways of making a documentary) but would not capture the subjective experience that gay men have of their voice. It's not an essential gay experience - not all gay men identify their voice as an issue -  but it's a common one. The experience, I would argue, and the film argues, is a collective one.

To put my cards on the table, I too have had similar ambivalence about my own gay voice and mannerisms. So perhaps I'm the target demographic. And perhaps I prefer "communal confirmation over more rigorous, troubled grapplings." But I would argue it's bigger than me or Thorpe. With the gay marriage victory in the US legal system, gay rights has had a success that arguably gay liberation has not. It's a real crisis of sorts for the queer left, and it also poses an issue even for more assimilated gay culture. Are there still structures of oppression that (objectively) police gay people and (subjectively) act as self-oppression? These are not legal questions, and I think the documentary is timely to raise them.

Certainly, the documentary form is conventional and the narration cloying at times. But even here, voiceover narration serves the role of reminding the spectator of the sexuality of voice. It's not political modernism, yet there is some interesting work on the signifier going on.

I do agree with Dillard that the conflict resolution is too tidy, or at least it feels like an imposition of the character-driven three-act structure on historical reality, which in fact offers no real resolution. Oe problem is that a film that does not adopt this narrative structure has a hard time for broad documentary distribution. But more charitably, I see the film in the tradition of feminist and gay liberation consciousness-raising, or a collective catharsis that's about connecting personal experience to social structures. Perhaps with that comes a desire for a progress narrative.
Labels: Contemporary Documentary project

Unknown said…
Thanks for these insights, Chris. I would remain adamant that the whole of the doc is conventionally left-baiting in parts and that Thorpe just isn't much of a filmmaker, spending too much time getting sound bites from famous folks, making the film feel like it's soft-balling its case. Furthermore, we're left with a superficial ending that resolves little of the deeper implications about voice and where these anxieties REALLY come from; rather, we get a scapegoating of films like "Laura" in an inane bit of (misguided) film history 101. The critique is old hat, right? It takes us back to Molly Haskell and "From Reverence to Rape," where we're stockpiling types and policing positive or negative representations. I don't know that Thorpe's conception of the dilemma goes too deep or, at least, he's unable to convincingly offer as evidence more than his own experience and strife, which too is a bit watered down and staged to soften the film.
10:45 PM

Chris Cagle said…
Clayton, I appreciate your reply. To answer some specifics: I agree that Thrope is not a great filmmaker. He seems self-taught and working in a mimicked, conventional form, a la Spurlock. I found the film compelling and insightful nonetheless. I have no doubt a better filmmaker could have made more of the topic, but a better filmmaker hadn't made that movie yet, so I credit Thorpe for doing so.

"Laura" is one of my favorite films and yes it's limiting to reduce the movie to the images-of reading. That said, I'm not sure images-of popular history is all bad. It is worth getting popular audiences to think about how Disney cartoons cast voices, for instance.

As far as the left-baiting charge, I really don't see the film's primary audience as progressive allies interested in gay rights politics, though they are important for distribution and the film does gesture at points to those spectators. As I mentioned on Twitter the film talks out of school too much to be a left-progressive rally cry: it reveals gay culture as neurotic, troubled, and conflicted in contrast to the political iconography mobilized around gay marriage rights. Honestly, I can't think of too many gay-authored documentaries lately (with any broad distribution) that interrogate gay culture and self-identity.

So in all I would agree with you on a lot of the aesthetic counts, even if I ultimately weigh the judgment differently. My main disagreement is that I find the gay politics of the film vital and even at times nuanced. But I seem to be in the minority opinion on the film!
4:55 AM