The Touristic Gaze of Festival Documentary 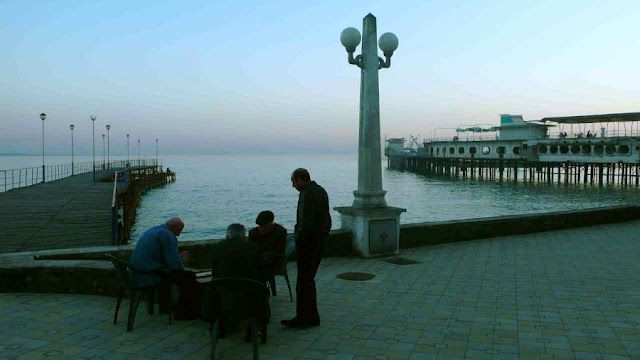 There are so many critiques that festival documentaries can and do face, and my impulse as a scholar is to take seriously these critiques but also think if there can be fresh ways to frame the aesthetic and political problems at stake. An overriding criticism of these documentaries is that they compromise their politics for a global (privileged) spectator, yet I think there is not a sufficient case to be made for the complexity of transnational spectatorship. I don't have a workable theory of this idea, but the answer may lie in the “touristic” shot common to documentaries.

The Domino Effect is a good example. It is a character-driven documentary about a mixed-nationality couple in the breakaway region of Abkhazia - not recognized as an independent country but not functionally integrated with Russia, either. The protagonists, Natasha and Rafael, feel the strain in their relationship as is unable to fit into Abkhazian society and is unwilling to give up his pro-bono efforts to build a national profile.

The film opens with a series of shots of the beach and many of the former Black Sea resort architecture now in a state of decay. Although not typically pretty, the treatment of the imagery falls into what Alina Predescu discusses as the picturesque in documentary. These shots stand in for the otherness of place and spectator. Even if the viewer is Abkhazian, she understands a hypothetical gaze from outside, appraising the country for its beauty.

These are all limiting things, which might be corroborated by the dripping condescension of HotDoc’s program blurb (though in fairness some of it is lifted from the promotional material):

In Abkhazia, an unrecognized “country” in Russia’s Caucasus, patriotism runs rather deep. In this Black Sea black comedy, its self-appointed sports minister must choose between his foreign wife and a bizarre tournament that will surely put them on the map.

And, yet, the touristic gaze is sometimes a useful hook for spectatorial engagement. The touristic shots figure the ideal spectator epistemology, since we are to balance socially objectifying knowledge (Abkhazia has insurmountable problems) and humanistic empathy (cross-cultural connection is a tough thing to maintain). And The Domino Effect does thematically present the shoreline as a space that is experiences with local in addition to touristic meaning. In fact, the Sea is one of the few resources Abkhazia has its disposal. 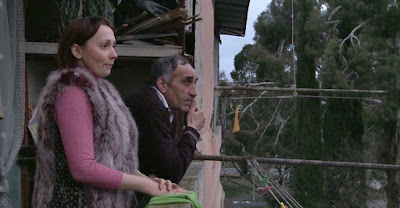 Establishing shots are frequently overdetermined in their meaning. But they are also part of a stable narrational disposition that can be a way of engage spectator’s attention without the traditional crutches of documentary features (expository voiceover, titles, talking head expertise). The recent festival documentaries make a strong turn toward art cinema style minimalism but the tradeoff is that they rely on underlying stable representational tropes to anchor the spectator's experience.