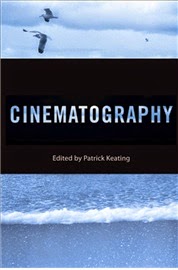 As regular readers of this blog will now, I've had a long-running interest in Hollywood cinematography, an interest that has grown from my 1947 project and has culminated in what will be a chapter in my book. Happily, too, I've been able to write a wide-view essay about cinematography during the (sound) studio era.

This essay appears in an edited volume on Hollywood cinematography titled simply enough Cinematography. It's one the first volumes in Rutger's Behind the Silver Screen series, a collection of volumes each tackling a different trade in Hollywood filmmaking. It's an overdue idea, in my view, and I'm thrilled to be in such good company.

Thanks to Patrick Keating for including me and for his editorial input. I can definitely say his guidance improved the final essay. Moreover, I've been gaining a lot of insight from my fellow contributors. Hopefully the volume will help make scholars more aware of cinematography as art and practice and will equip them with historical narratives to embark on research projects on the visual style of commercial cinema.
Labels: cinematography publications