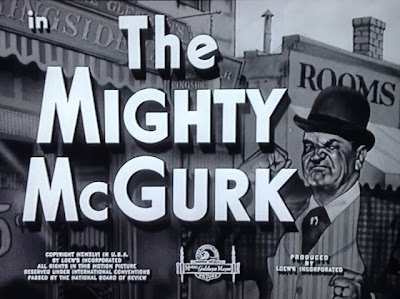 Like many scholars, I've found Rick Altman's syntax/semantics model of film genre a productive one. And watching The Mighty McGurk (MGM, John Waters), I found a good example of a film with the genre semantics of the sentimental drama I've written about. There's the turn-of-the-century setting... 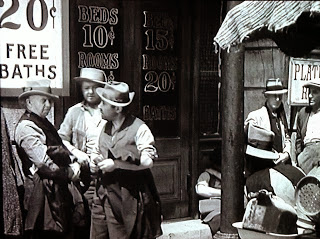 and the figure of the European orphan (Dean Stockwell again), whose pathos is mirrored in his adopted animal. 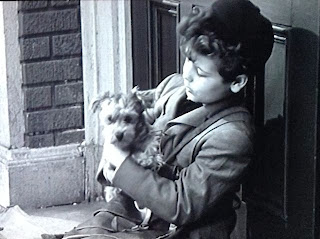 The narrative also shares some relation to (melo)dramas like The Crowd Roars. And yet, the film's grammar is closer to a hayseed comedy, built around Wallace Beery's star turn as Slag McGurk, a past-his-prime boxer whose delusional phoniness is pretty much evident to everyone and which provides many of the film's gags. 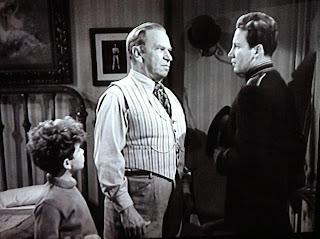 If the screenplay did not impress me aesthetically (it exemplifies the obviousness some 1940s critics railed about in Hollywood films), the ideological implications of the narrative fascinated me. Just a decade and a half after the repeal of Prohibition, we have a conflict between a Bowery saloon owner and a Salvation Army member trying to shut the saloon down. Like many Hollywood films, The Mighty McGurk wants to have it both ways ideologically, siding with its Bowery protagonists yet seeing the Prohibitionists as morally right. Unsurprisingly, McGurk undergoes a transformation over the course of the film.

I've been fixating more and more on the idea of certain ur-ideologies in classical Hollywood. That is, recurrent ideological tropes that structure not only one film but define the terms of a given film. Frequently, the structure is triangular. The rich in this film are not admirable, but neither are the poor. The film triangulates a petit bourgeois rectitude in contrast to the two - built around the stable nuclear family and straight couple, to be sure, but not reducible to romance.
Labels: 1947 project