The Hermeneutics of Found Footage

I will be heading off to the Visible Evidence conference next week, and in advance of one of the screenings, I watched Cinema Komunisto (Mila Turajlic, 2010), a Serbian documentary about the Yugoslav film industry. Personally I found it helped orient me to the history of a national film industry I was only passingly familiar with, and I can imagine using the film in a film history survey to deal with national cinema, coproduction, and transnational genre. On top of which, the film presents a theoretical understanding of cinema as national imagined community - I'm not sure the analysis fully holds up, but it's provocative and savvy nonetheless.


But the film also raised for me a theoretical issue. Much of the documentary balances relatively straightforward present-day with interviews with archival footage and footage from the period films. Thematically this makes sense, since the film's stated thesis is that people's relation to the nation state was mediated by the Yugoslav films. And it's a familiar trope of what we might call postmodern documentary - the use of old movie in Thin Blue Line for instance.

Here's a good example of the latter. A shot of the Pula amphitheater in smoke (battle? fireworks?) cuts to a war movie clip of a character walking in gas mask. 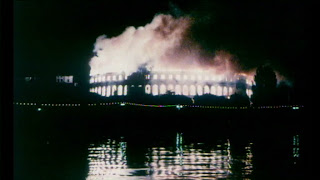 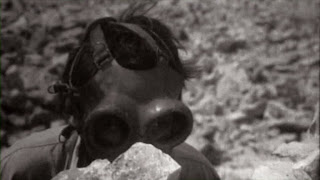 These kind of juxtapositions make me wonder what kind of spectatorial experience they provoke. I am presuming enough viewing comprehension not to mistake the second shot in these pairs as either spatio-temporally connected or in the same register of image reality as the first. That is, the shots from older movie read as nonrealist and stagey. Some possibilities spring to mind:

Critique. One of the common textual analysis readings is to see fiction or doc-fiction as critiquing documentary veracity.

Blank Irony. The Frederic Jameson view of postmodern culture, in which the ironic montage is not actually experienced as having any substantial commentary on the original. At its extreme the hokey war films come to stand in for the actuality footage we don't have. We as spectators intellectually know we're not watching partisan battles but experientially it shapes our understanding of them.

Self-Reflexivity. The documentary is a movie about movies, so the montage could be read simply as suggesting that movies are important - a bit like the second-order montage I discuss here.

Historical Chauvinism. A common effect of found footage is invoke a sense of cultural superiority to the past by emphasizing hokey, humorous, or otherwise dated fictional tropes. Thematically, Cinema Komunisto does not emphasize this (it's actually nostalgic), but the fact the films are rarely cited as coherent works abstracts the footage from the context - as in the shot of the Stalin photograph: 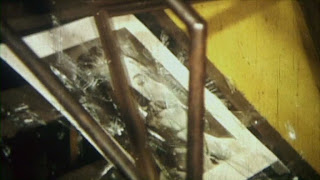 My gut sense tells me that Critique is not the dominant dynamic. There have simply been too many films with this kind of semi-ironic montage to have the frisson it once might have had. But it seems to me there's not one effect but a nestled hermeneutics of effects that are both social-historical (I don't have the personal knowledge someone from ex-Yugoslavia would) and formalized (I'm presuming with some justification that one can talk about the text with some facticity, and discount misreadings that for instance would mistake fiction footage for documentary).