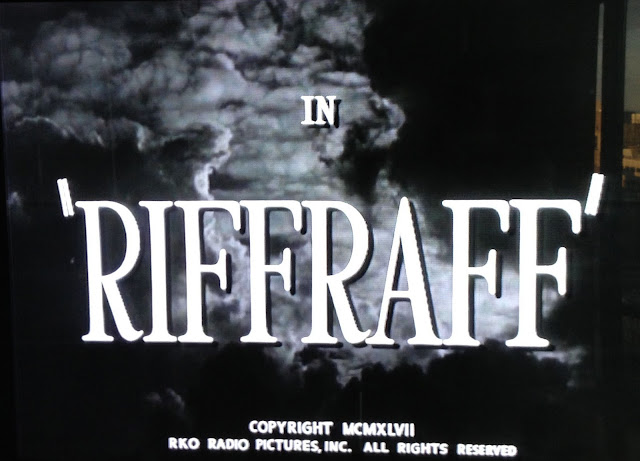 By most counts, RiffRaff (Ted Tetzlaff, RKO) should qualify as an ideal noir example: purloined letter narrative; a Latin-American setting, half romanticized, half contemporary; femme fatale character; big-business-as-crime thematics; and a hard-boiled character who stumbles into a crime. There are probably two things that have kept it far from the noir canon. The lead character Dan Hammer is played by Pat O Brien, whose aging star image does not quite fit or carry the role. This is compounded by Ted Tetzlaff's direction, which even by the standards of a low-budget programmer tends to be wooden in directing actors.

But Tetzlaff, known primarily as a cinematographer, brings a remarkable visual style to the film. The opening scene is a virtuoso example of visual storytelling, with little dialogue at all. Instead, there are a a series of camera movements that reframe the space of an airport hanger and airplane, slowly revealing characters and establishing their relationship to one another. (Sorry for the poor image quality: these were photographed from a TCM broadcast.) 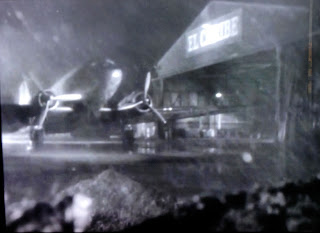 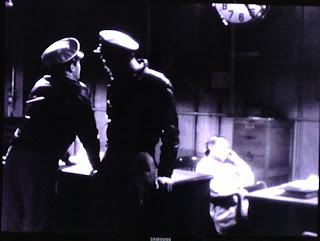 David Bordwell has a terrific discussion of Tetzlaff's work as cinematographer at Columbia in the early 1930s. Here, George Diskant is the cinematographer, but it's hard not to see some of Tetzlaff's visual aesthetic at play. Tight framing, expressive fill lighting, and visual jokes - with the final keyhole shot reminiscent of the shots Bordwell notes in Tetzlaff's early 30s films.

Riffraff lacks the realist-meets-modernism cinematography of a John Alton film or a Union Station - Tetzlaff would go this direction the following year in The Window -  but it's very much a cinematographer's movie.
Labels: 1947 project cinematography