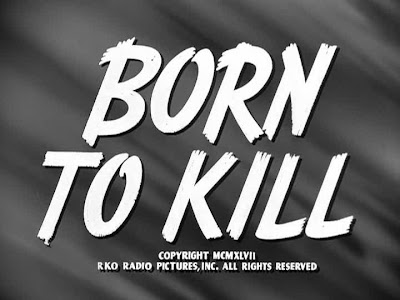 If I had to point to any one film that marked a new sensibility in film noir, it would be Born to Kill (RKO, Robert Wise). Of course, one can categorize noir according to genre (gothic v. police procedural) or production category (A film v. B film), but the sensibility shift I'm talking about is one from the (mostly) romanticized noirs of the 1940s to the "realist" style more dominant in the 1950s.

In true 1947 fashion, this film opens with location shots of Reno, Nevada: 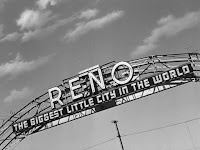 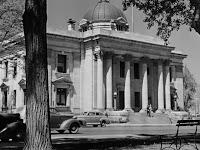 Born to Kill is no Naked City, however, and such location shooting is contained to a few transition scenes. (The rear projection work is not too bad, incidentally). What marks the visual style as realist is its flatness: relative lack of diffusion and glamour lighting lend a harsh look. On top of that, the lighting set ups are complex but disordered in their placement. 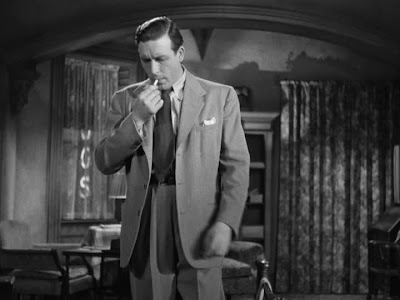 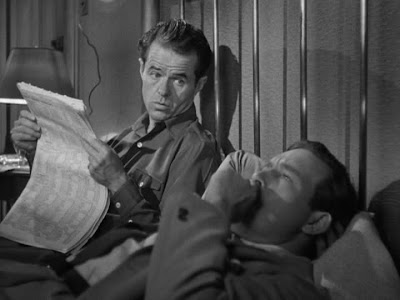 Patrick Keating's recent book on Hollywood lighting notes how certain violations of rules (an extra shadow on the image) might be allowed if it served another function (storytelling emphasis, say). But what we see here is the acceptance of a previously unacceptable amount of stray shadows in order to accommodate two mutual exclusive goals: cheap budgets and luxurious, "artistic" lighting effects.
In addition to change in visual style, Born to Kill takes a sang-froid approach to its sexual subtexts. There's the psychosexually-disturbed killer, Sam, played by Lawrence Tierney and the sadism of the relationship with Helen Brent (Claire Trevor), who is turned on by his psychopathic nature. On top of that, there is the connection between Sam and his roommate-friend Marty (Elisha Cook). Marty covers for Sam and gets jealous at appropriate points; as the image above shows, they share a bed in the boarding house. Unlike the exoticized queerness of Laura, House on 92nd Street, or Gilda, the implied gay/trade relationship here seems seedy and mundane.
Labels: 1947 project cinematography gay/lesbian criticism realism