I find the Sirkian system argument a productive one for thinking about films' relation to their social milieu. Even if one does not subscribe to a Category E reading, the versions of those readings suggest the complexity that interpretation can bring to the table.

But one critical tendency gives me pause: the narrowed ascription of what middle-class life means in postwar America. There is a particular critical readings (such as McNiven's argument about architecture in Ray and Sirk, or for that matter Fassbinder's reworking of All that Heaven Allows) that reads Douglas Sirk as a critical commentary on television in middle-class life.

Fine as it goes, only Sirk was not alone in critiquing television. It seems that the middle class – or certain fractions of it and the mainstream culture addressed to it – loved to see TV as a problem. This is true in a social problem film like Face in the Crowd, which centers thematically on the corrupting role of mass media on the public sphere. But it is elsewhere, too, as in The Last Hurrah (John Ford, 1958), the cinema looks at television and sees it as lacking. 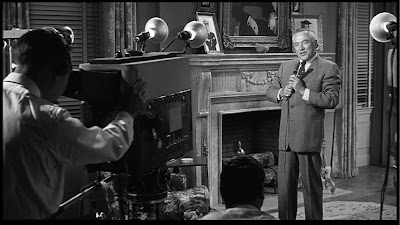 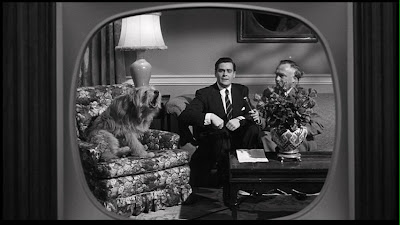 The bemusement at televisual political marketing comes from the novel, but I think the film version does something different than the literary source. In the book, the prime axis of difference is between the mass mediated and the unmediated, between marketed politics and retail politics. In the movie, the prime axis is between TV artifice and (implied) cinematic reality. TV becomes a problem not because it replaces an unmediated sociality but because it is crasser and inferior to movies.
So a number of things get collapsed:
- the fairly widespread anxiety and critique of mass mediation. Academics were not the only one to read Mills' The Power Elite.
- Hollywood's anxiety about an ascendant culture industry.
- the transformation of the public sphere, toward newish modes of legitimation.
- narrational problems of a film that tries to show the objectifying social knowledge the novel so effortlessly presents.
This is just another version of two critical impulses I like to champion. First, a broader, more inductive view to film selection in the histories, even interpretations, we write. Second, a refusal of a historical chauvinism that sees the past as mere retrograde simplemindedness.
What I'm asking for is less a history of TV-in-film (though that's certainly interesting) than a more generous sensibility we have as scholars interpreting the past. This sensibility would build in the subjective understanding of the historical agents into our objectifying world view of the past. To this end, I'm interested in how a vernacular social theory informs popular culture.
Labels: ideology political and social theory