I believe this is the first time we see the title sequence over a static photograph (instead of book or drawing or live action shot). 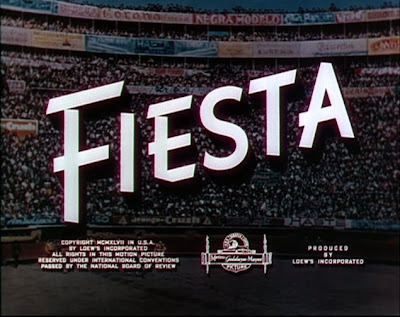 Fiesta (Richard Thorpe, MGM) is a film that makes me want to visit those major genre studies of the musical (many of which I've regrettable still not read) to see how they discuss the mainstay classical Hollywood musicals that fall outside the canon. MGM in particular made a number of films that featured musical performance prominently and are now marketed in DVD box sets. Yet many of these fail to match the ideal types we have of either backstage or integrated musical. 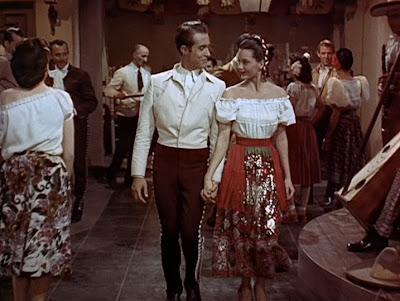 The Esther Williams films are interesting on this count. Here, she makes one obligatory diving appearance. And, as in her other films, she is surrounded by characters with musical or dance inclination, in this case her twin brother Mario (Ricardo Montalban) and his love interest Conchita (Cyd Charisse). The new twist here, is a gender-bending narrative, with Maria (Williams) cross-dressing and subbing in as a torredor. 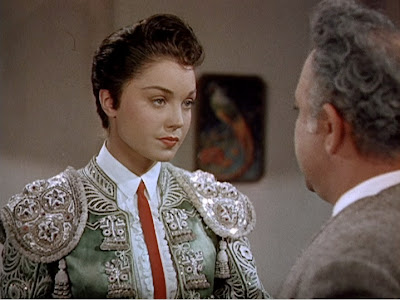 There's the camp quality of Williams and Mary Astor's complete lack of any attempt at a Mexican accent. After seeing and researching the production files of Unfinished Dance, too, I wonder if there's a concerted effort on MGM's part to skirt with sexual abberation in their scripts, here the unhealthy attachment between twins Williams and Montalban.

Three directors of photography – Sidney Wagner, Charles Rosher, and Wilfred Cline – served on the film, in addition to Natalie Kalmus as Technicolor color director. The film is in fact an interesting match (or tug of war depending on the perspective) between MGM house style and individual style. Much of the opening and closing sequences, for instance, are in a high key approach to color that is distinctively MGM's: 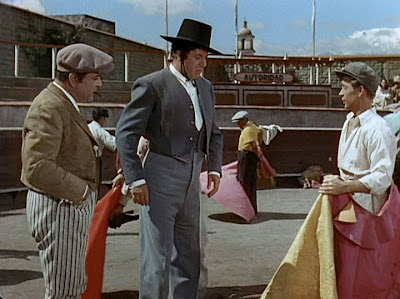 Other scenes, especially interior nighttime scenes, take on both a heavy use of shadow and multi-sourced lighting that seems to indicate Charles Rosher's hand. 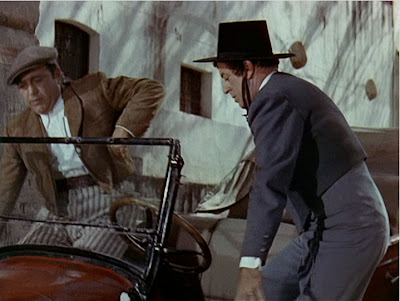 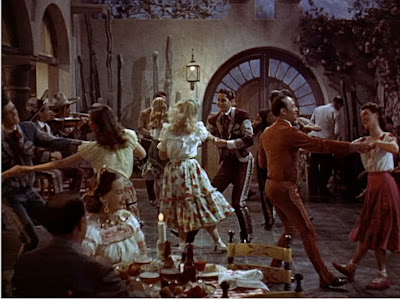 These scenes are still high key - not even really medium key - but they reduce the flooding of light that we associate with the upbeat musical style. Instead, they take on a certain jewel-like quality, aided by the muted-pastel art direction.
In the comments a few posts back, Scott Higgins suggested that Rosher's work merited more than being lumped in with a generic MGM style. He's right of course, and Fiesta suggests the value of looking closely at precisely the kind of film that today would be dismissed as tossaway Hollywood. Incidentally, the film is a great illustration of the twin approaches of restrained Technicolor and an expanded palette: the art direction and costuming is noticeably unsaturated, with a heavy emphasis on browns, yellows, and pale oranges, except for the recurring bright, saturated red highlights. The Montalban-Cherisse "La Bamba" dance illustrated above is a good example of this strategy.
Labels: 1947 project cinematography genre theory