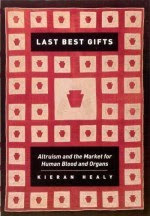 It has been a goal of mine lately to read more outside of my field. Not that I have remotely caught up with everything I should be reading/should have read in film and media studies. But it's useful to get beyond the disciplinary blinders and to get out of one's comfort zone a little.

My current reading is Kieran Healy's sociological study of blood and organ donation, Last Best Gifts: Altruism and the Market for Human Blood and Organs. The book is remarkable in a number of ways - for instance, if you want a pithy 1-paragraph explanation of commodity fetishism, I don't think you'll get one clearer than the one on page 4. But the book also strikes me particularly useful as an ideal in how to assert the primacy of one's disciplinary knowledge. For Healy takes a subject that one might on one hand seem the realm of the philosophy of ethics (since it involves individuals' moral decisions) or else of economics (since there is a clear problem of supply, demand, and incentive) and argue that the social helps us understand the phenomenon in ways that mark philosophy or economics inadequate. Moreover, he demonstrates, ethics and homo economicus are culturally contingent modes of knowlegde in this arena.

I bring this up to contrast with the way I normally see my own discipline deal with other disciplines, which is simply to deny their validity. Too often, we assert or imply that historians are naive, that economists are ideologically duped into being minions of Capital, and that sociology and political polling were strange constructs of mid-century America, when academics didn't realize that you can't study societies empirically. I exaggerate but not much.

There is a value to humility. (Healy takes neoliberal economics seriously at the same time he challenges it.) But equally disciplinary primacy has to be demonstrated, not merely stated as an in-group mantra.

Now, the Healy approach is not exactly open to us. Film studies may not be a true discipline and in any case is bounded by its object of study - we cannot readily do a film or media studies reading of news and the business cycle, say. Or if we do we would have a very different kind of film/media studies. Very often we are dependent on prior disciplinary approaches (history, philosophy, art history, literary interpretation) that we then apply to our object of study in a distinctive manner. Nonetheless, I would love to see a lot more of its spirit in our work.
Labels: books discipline