This Time for Keeps

The more I watch MGM films, the more I'm drawn to what one might color Technicolor modernism. The set design for its color films in the late 40s tended toward extremely bare surfaces painted in desaturated pastels: grays, pinks, and pale greens. My favorite parts in Cedric Gibbons' design for This Time For Keeps (Richard Thorpe, MGM) are the rendering into this color palette of the high Victorian resort town of Mackinac Island. Ornate wallpaper becomes an abstract pattern – one doubled by the watercolor-y opening and closing credits.

The film itself features a triangular ideology: Dick Johnson is the son of a controling opera star; instead of following in his father's footsteps and plans, he prefers popular singing to opera, "Dick Johnson" to Richard Harrell II, and swimmer-performer Leonora Cambaretti (Esther Williams) to his society-girl betrothed. In other words, the kinds of vernacular modernism we see in New Orleans gets repeated here.

The supporting characters, however, do not fit neatly into the manichaean struggles common to such treatment: Jimmy Durante's friend of the family who looks out for the performer while harboring a secret crush (as in Bachelor and the Bobby Soxer, the intergenerational material is oddly both dealt with aot dealt with); Leonora's neice, who overcathects to the couple's union; and Mr. Gordon, a self-proclaimed "doormat" sugar daddy. What's unusual – yet typical – is the absence of traditional nuclear family, yet presence of substitutes, all in a narrative ideologically arguing for the nuclear family and break from tradition as much as Marty would ten years later.

The "old country" stands in for a lot here, but so, too, does the turn-of-the-century. I'm fascinated by the way "Americana" in MGM's world has a specific referent: the moment when industrial ascendancy coincided with small-town life. Mackinac Island represents the idealized smalltown milieu, but it's also the sort of resort that could only come into being with train travel and mass tourism. Getting at that contradiction seems to get at the heart of the MGM ideology. 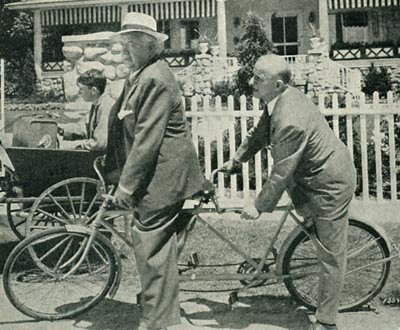