Springtime in the Sierras 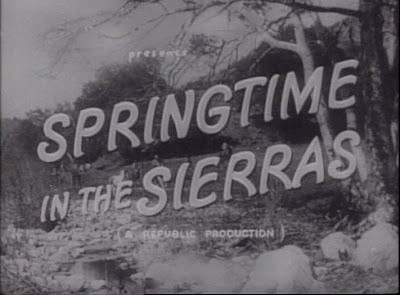 The 1947 Project has paid dividends in making me aware of the unexpected places where a social problem mentality met more traditional genre production. But still nothing prepared me for the surprise of a Roy Rogers B film adopting a social problem approach. Well, Springtime in the Sierras (William Witney, Republic) is a typical B Western: "Western" only in the setting and iconography, not in its narrative structure; Manichaean in its characterization (the brunette vamp is over-the-top evil); and external in its action. The externality of action keeps it from being a problem film in the manner that Gentleman's Agreement or even Crossfire are.

The narrative premise is that poachers are running a racket in the small-town West and are starting to kill to protect their business. The narrative starts off as an individual narrative (Roy Rogers stumbles on a wounded animal and takes her to a local rancher) but quickly the dialogue points out that poaching is a national problem. What follows is a documentary sequence that steps back from the narrative, as a voiceover relates the problem of poaching in the U.S. It ends with a judge admonishing "the lowest form of criminal" (!) in a setup reminiscent of the 1930s Warners topicals.

The film dissolves back and the narrative continues as before. The only thing I've seen quite like it is the "beef to feed a nation" montage in Red River, which also departs from the diegesis.
Labels: 1947 project fake documentary social problem film