The December Philadelphia Cinema and Media Seminar talk will be next Thursday: 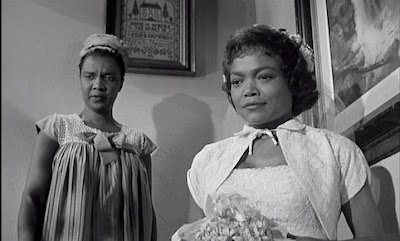 This paper explores the cultural resonances of and patterns of identification
with the urbane black melodrama Anna Lucasta (1959), a relatively unexamined film that significantly included African American input into the processes of production and contributed to the development of an cosmopolitan black aesthetic and style of characterization for Hollywood cinema. In this paper, I use both theater and film production history and the responses of reviewers of the Black press, who linked the film to “modernity”, to tease out the meanings of Black, mid-century cinematic cosmopolitanism, its citations of the vernacular visual style of noir and its relationship to the emergence of civil rights. This paper joins with previous work that seeks to reexamine the films of the 1940s and 50s to better understand their racial meanings and continuities with Black-authored films of the 1960s and 70s.

Ellen Scott is a Mellon Post-Doctoral Fellow at the University of Pennsylvania in the Department of Cinema Studies. Her research is on the cultural meanings and reverberations of film in African American communities and her current work is on the dialogical historical intersections between Black film reception and the censorship of films with racial themes during the 1940s and 1950s. Her research and teaching interests include African American cultural history, film theory, American film history, sound theory, the history of film censorship, and cultural studies.

Homay King is Assistant Professor of History of Art at Bryn Mawr College. Her fields of speciality include American cinema, film theory, psychoanalytic theory, and feminist film theory and criticism. She received her doctorate from the Department of Rhetoric at UC Berkeley in 2002, with a dissertation entitled "Effaced Figures: Authorship and the American Cinema." She has published articles on the films of John Cassavetes (Camera Obscura 56), Valie Export (Discourse 22.2), and Michelangelo Antonioni (Fort Da 6.2), and on the photography of Jeff Wall in relation to film theory (Jeff Wall: Photographs, Verlag der Buchhandlung Walther König, 2003). Her book Lost in Translation: Orientalism, Projection, and the Enigmatic Signifier is forthcoming from Duke University Press.

The full PCMS listings can be seen at its website.
Labels: local announcements racial representation