I’ve been overdue reporting on my time at FIDMarseille this year, taking in a festival that has a dual distinct niche on the European documentary film festival circuit. First, its programming has a pan-Mediterranean orientation, including a good number of works from the Maghreb and from the Levant. Second, it gravitates toward “difficult” works, particularly slow-paced contemplative docs or rule-breaking essay film style works. However, my biggest surprise in encountering the FIDMarseille program was seeing the inclusion of fiction films amid a program of documentaries, essay films, and hybrid works, and absolutely no marking of films according to genre.

There are some disadvantages of this approach (which I’ll get to in another post), but it had the advantage of making me encounter each film on its own terms, to gauge not only its facticity but also its narrational system in the process of watching. I think this paid off for Machine Gun or Typewriter, a film which like many at the festival only really gripped me in the second half, as I got a feel for its narrative rhythms and tone.

And at heart, the film is a narrative, based on a fictional script and with the feel of a short story or novella. The narrator in this instance is a literal storyteller, a pirate radio broadcaster based in Los Angeles (real? fictional?) recounting his story of political and romantic involvement with a committed and radicalized leftist. 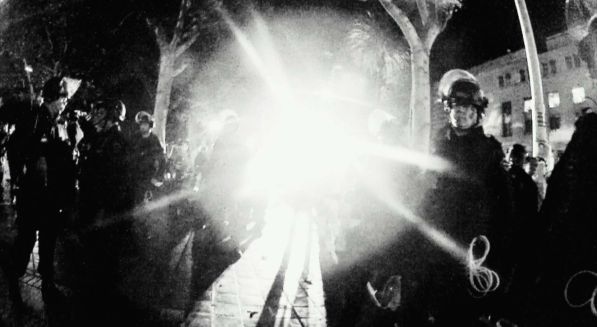 However the story lacks the enactment of the script, relying instead on the relation of voiceover to nonfiction image common to essay films. Moreover, the narrator ventures into nonfiction asides, in the manner of Thomas Pynchon or from the other angle, Mike Davis, whose City of Quartz seems a touchstone here. So much of Davis’s vision of Los Angeles is here: the references to the Black Dahlia, the iconography of Bunker Hill, or the half-forgotten genealogy of the Los Angelino Left.

It is on these grounds that inclusion in my doc blogging seems fitting. The part of the film devoted to an East Los Angeles cemetery is one of the most effective and affecting doc sequences I’ve seen this year.