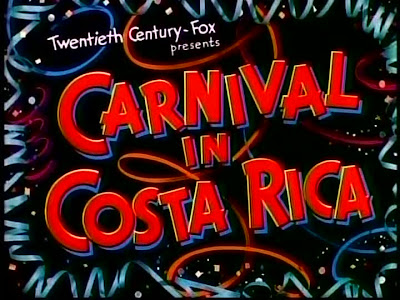 I expected a spectacle travelogue from Carnival in Costa Rica (20th-Fox, Gregory Ratoff) and on a basic level, the film did not disappoint: the Good Neighbor cultural condescension is thick and the musical numbers are designed to show off the Technicolor. 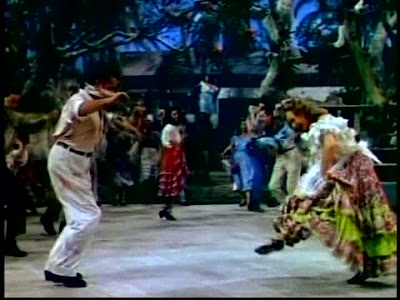 What I did not expect was a feature film so similar to others I've been watching in 1947: a low-key comedy-romance-melodrama hybrid wedged halfway between B film and A film aesthetics. Luisa Molina is the daughter of a Costa Rican father and an American mother, and her family wants to arrange a marriage with Pepe Castro. Neither Luisa nor Pepe are excited by the prospect of arranged marriage and prefer their romantic interests instead. The film, therefore, becomes a drama about the coming of modernity and the playing off of gender and class against traditional stricture.
Formally, there are a couple of notable things. First, even this film starts off with the documentary-style shot, with a voiceover narration. However, this narrator is accented and serves more of a self-conscious narrating function. The travelogue aesthetics class with the pseudodocumentary realist aesthetics. 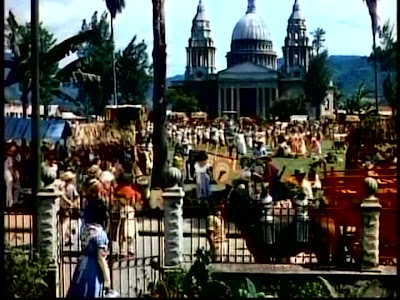 At times, two, there are moments of montage editing for stylistic flourish, as in a rural procession that intercuts close ups of wheels repeatedly. 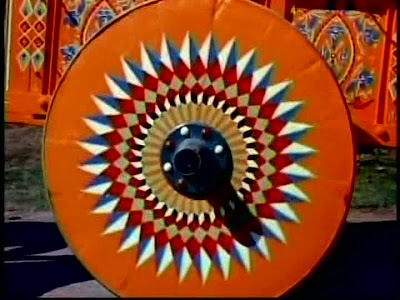 It is interesting to think of this as a Fox film, if only because of the contrast with their prestige product. This feels closer to the universe of Tycoon than Ghost and Mrs. Muir.
Labels: 1947 project class house style