The Realm of the Legitimizable

Long time, no post, I realize. I hope to ease back into a more regular writing schedule here.

Drew Morton has a post up at Dr. Mabuse responding to Roger Ebert's claim that "video games can never be art." Drew's rebuttal is measured and pretty convincing.

But given as this comes the day after a class debate I witnessed over whether TV advertisements were art (and if so, in what circumstances), I thought it might be worth stepping back to think about the very terms of this debate. To my eye there are a number of positions out there.

1) The debate over whether something is art or not is beside the point. Usually this claim is made on the basis that art (by which in this instance we mean a generally positive, expressive phenomenon) is a highly problematic term, either because it's ideological or because it's too subjective. I don't generally subscribe to this position, since I think that some human activities are far more open to aesthetic contemplation and experience than others and that cordoning off such activities from non-art can be useful. But this critique of the "is it art?" question does at the very least give a valuable reminder that the question imagines a community that imposes its judiciary authority on the matter.

But if we accept that figuring out the relative aesthetic expressivity of videogames is a worthwhile discussion, I see a few positions specific to the medium:

2) Videogames are not art. The Ebert position. And many others' undoubtedly. To the extent the arguments do not appeal to a self-obvious truth, the objections can vary and may be based on perceived intention, on narrative experience, on content, on authorship, or any number of criteria.

3) Videogames are already art, according to existing criteria. Some argue that games do precisely the things that we already praise in, say, literature or film. They engage affect and identification. They explore complex themes. Et cetera. This is what I see Drew as arguing.

4) Videogames are not art but they will be. Possibly, the existing games to date have not so much offered us an art as a testing ground for new audio-visual vocabularies - and centrally, for interactivity - that will form the basis for the vibrant art of tomorrow. Grand Theft Auto may not be art (then again, it may - see #3), but the audio-visual art of the future may look a lot more like Grand Theft Auto than it does No Country for Old Men.

5) Videogames are art, but only if we shift our aesthetic criteria. Drew (among others) gives the analogy of the early days of cinema to the present reaction to video games: did film, too, not face similar disdain in its infancy? Indeed, but I think it's easy to underestimate how much of a cultural sea change it was to extend serious aesthetic consideration to cinema. It involved not merely getting over class associations (or erecting an intellectual edifice capable of dealing with them), it required new approaches to aesthetic apperception. If some are not capable of extending to games the aesthetic contemplation they regularly extend to cinema, it could be because of snobbery (reason #3) or lack of imagination (reason #4), but it could be because the things they look for in judging or contemplating art are based in a specific set of arts - things like a unified form-content relationship wedded to an affective involvement that builds over the course of the experience of the work. Video games may have these (#3) but they might not. Or at least not in forms conventionally recognized.

As you might guess I'm partial to #5 but will acknowledge that others partially explain the issue, too. 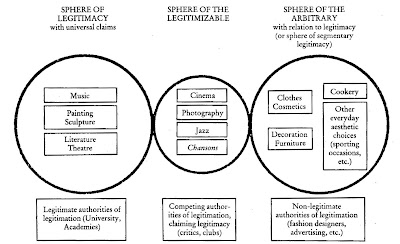 table from Pierre Bourdieu, Photography: A Middle-brow Art (Stanford UP, 1990), p.96
This is why I bring up advertising. Not because the analogy is perfect, but because it is a reminder there is no automatic or teleological process by which a new cultural passes from arbitrary to legitimizable. Cinema did (it's not fully in the legitimate realm yet, but is getting close), and television is currently. Videogames may, but they may mostly remain, like advertisement or cooking or fashion, in the realm of "culture" but not "art."
Labels: aesthetics gaming sociology of taste

Jesse M said…
A fascinating and endlessly helpful breakdown of this topic. I gravitate toward position #3 on your list, partly because I strongly believe in a flexible semantic system that can provide a reliable definition for "art", and I see "art" as anything that fulfills certain intentional conditions and certain human needs. I wouldn't want to break down my criteria too finely, but I think video games fulfill the criteria I find most convincing.

However, I see that Ebert is coming from a very different perspective, seeing "art" as a marker of merit, rather than a categorical definition. He says in a comment on his blog, "Very few films are art." This means that he sees "art" as an aesthetic achievement that has reached a certain level of merit, whether it's technical, conceptual, or cultural. He also constantly argues against the merit of particular games, rather than the formal qualities of video games in general... he's backed off a bit from his previous argument, I think, which is that games aren't art because they don't allow for "authorial intention" (a silly argument if ever I heard one). If he stuck strongly to the "art is a merit-based distinction" position, he would actually be a #4, not a #3.

However, he also claims (sometimes explicitly, and sometimes implicitly by contrast) that video games are not an art-form, whereas film IS an art-form. This, in my opinion, is where his argument falls apart, because he is moving from a merit-based definition to a categorical definition of the form, and he never justifies this categorical claim. I guess the closest thing he has to an argument is the general claim that video games are a commercial enterprise for the creator and an objective-oriented, entertainment-based activity for the player. However, art has always co-existed with both of these criteria, even back to Shakespeare and Sophocles, so I don't think his argument holds water.

You've given me a great jumping-off point for considering these factors. Great to see this debate given the theoretical attention it deserves, since nobody (especially Ebert, Penny Arcade, and the forum-dwellers) seem capable of doing so.
7:30 AM

Thanks for keeping on with this debate. That said, and this comes after my article set off a Facebook debate thread, I think I have to admit that I now stand somewhere between #3 and #5 (I feel like I'm ordering from a McDonald's Menu all of a sudden).

Essentially, the thread became centered around each person's definition of art (as you point out) and I couldn't even formulate a proper definition on my own which, of course, makes arguing for video games as art rather difficult (it's like pornography, I know it when I see it!). Upon reflection and in conjuction with your piece, I think my inability to find a proper definition would edge me towards number five. Video games do not match traditional definitions of art because of new digital production tools (programming) that can express themselves formally (via rules and limitations in the gameplay itself).

I would highly recommend two essays to those interested:

Steven Lloyd Wilson-"What can changes the nature of a man?"

Simon said…
Excellent points, I especially like number five. Art, I think, is a perspective thing, video games can well be art to someone who also thinks The Godfather sucks. Nobody will be right or wrong in this situation, it's just different views.

Video games did, after all, start out as interactive movies. So, there's that.
6:17 PM

Adam M said…
A well written and thought provoking blog. What makes art 'art' is highly subjective and therefore down to the individual, though the points addressed here are well made.
6:12 AM