Just recently I saw on TCM one of those remembrance pieces on Sidney Poitier, claiming that his importance is the influence he had on future black actors. The piece gave the influence argument a “pioneer” spin: Poitier, in its version, allowed Denzel Washington to happen.

I'm left scratching my head, not because Poitier does not offer performances worthy of imitating or because I think contemporary actors do not think themselves in debt to Poitier. But because if I entertain the counterfactual I can see a few possible avenues of historical causation:

Numbers 1 and 4 are possible but do not strike me as very likely. My gut tells me 2 and 3 are about even in their chance, though there is no way of knowing. The point is that the influence argument is fallacious because, among other things, it reads causation backward.

Beyond causation, what of the aesthetic value we assign to influence? Again, I'm a little baffled. If Godard draws inspiration from Sam Fuller and Monogram pictures, without these he'd presumably have found other material to be inspired by.

Michael Baxandall, in Patterns of Intention, sets out another critique of influence arguments; they get the vector of influence reversed: “If one says that X influenced Y it does seem that one is saying that X did something to Y rather than Y did something to X. But in the consideration of good pictures and painters, the second is always the more lively reality” (59). In Baxandall's example, Picasso's work forever reinterprets what Cezanne's meant. One could easily substitute in Godard and Monogram Pictures.

The influence fallacy is more common in popular criticism than academic film studies, but it abounds here too. I have already mentioned examples in Jon Lewis's textbook. Often, I suspect, we adopt the influence fallacy when we want to seem relevant, to make that obscure older film seem vital to the contemporary culture our students claim in defiance of academic taste and bygone historical periods.
Labels: film criticism historical method

Dan said…
Jorge Luis Borges has an excellent piece on the problem: "Kafka and His Precursors" (available here, for example, originally from a collection Everything and Nothing). Borges argues, after cataloging some of Kafka's influences, that:
"If I am not mistaken, the heterogeneous pieces I have enumerated resemble Kafka; if I am not mistaken, not all of them resemble each other. This second fact is the more significant. In each of these texts we find Kafka's idiosyncrasy to a greater or lesser degree, but if Kafka had never written a line, we would not perceive this quality; in other words, it would not exist."

Kafka, in other words, creates his precursors, not (just) the other way around.
8:13 AM

Kelli Marshall said…
Hi--I'm new to your blog and am enjoying it so far.

Really interesting piece on Poitier. Admittedly, when I teach IN THE HEAT OF THE NIGHT, etc. and talk about Poitier's star image, I generally also mention Denzel Washington's Oscar speech, which implies Poitier's profound influence on his award and career. After all, it is with Poitier that Washington begins:

Thanks to your musings here, I'll now think differently about that Poitier class lecture. =)
1:46 PM 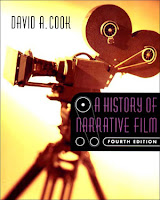