I found myself fascinated by 7 Pounds, if only because of its unusual genre project: half melodrama, half puzzle film. And by melodrama, I don't mean the generalized form that we might say most Hollywood dramas invoke; by that definition, Eternal Sunshine or Memento are also melodramas. I mean a specific story type heavy on moral message, pathos, and intersecting fate. At almost every turn 7 Pounds is a Will Smith Drama. Moreover, Smith's presence certainly activates reading cues to interpret this strange film (narrationally speaking) as a conventional one (generically).

The puzzle-film narration is aggressively ambiguous. Take for instance, the flashback insert during the shower scene:

In many ways this kind of flashback is both typical of the 60s-era Euro art film and the postclassical thriller or crime film. (c.f. The Limey for typical puzzle film mixing of these impulses in its flashbacks.) What's remarkable about the flashback in 7 Pounds, however, is that it occurs quite late into the film and in many ways is more readable than the otherwise "straight" narrational style we have seen up to that point. The flashback, in effect, hints at the causal connections the film has consistently elided til then.

Of course the puzzle is not simply in the text but also in the way the film was marketed (promotion materials refused to say what film was about, suggested a payoff twist). Then, there's the chapter menu on the DVD, which dispenses with the usual chapter "title" and presents instead a succession of images themselves offering no coherent narrative progression: 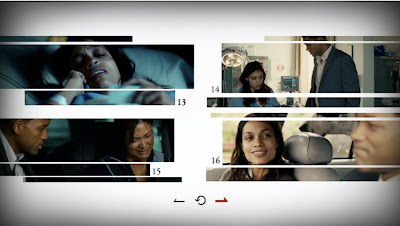 Of course the film by many measures failed. Some prominent critics hated it. It garnered lackluster boxoffice returns. I'd be surprised if it made as much a dent on the Will Smith star-text as Pursuit of Happiness did.

The failure itself interests me. Both as curious armchair observer of the industry (when and why do some producers take risks like this? do they see the projects as risky?) and as someone interested in genre. As puzzle film, 7 Pounds is not groundbreaking, but its (failed?) experiment suggests to me how much the puzzle film predicates itself on certain genre territory, especially the thriller, the supernatural/horror film, or science fiction. Maybe this is not too surprising: modernist experiments of the 60s and 70s art film found fertile ground here, too (Don't Look Now; giallo; La Jetee; Je t'aime, je t'aime...). But as much as the modernists among us complain that post-classical, commercial uses of narrational ambiguity commit the cardinal sin of tying everything up at the end, post-classical narrational ambiguity still fights against some strains of moral order in narrative.

Either that, or demographically, there are two constituencies for puzzle films and melodrama, and each will tend to dislike the halfway attempts that compromise their favored genre.
Labels: genre theory melodrama narration