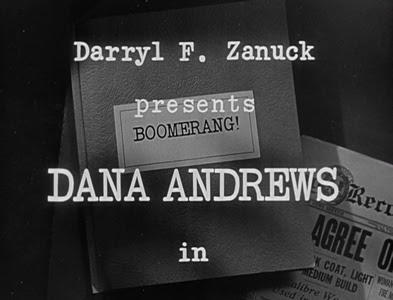 I decided to start off my 1947 Project with a pseudodocumentary that's been on my to-see list for some time, Elia Kazan's Boomerang! (20th Century-Fox). Although the pseudodocumentary cycle (or "semi-documentary" in contemporary parlance) included a few entries from independent producers or other studios, Fox - Darryl Zanuck, Louis de Rochemont and director Henry Hathaway - developed the template with House on 92nd Street and made about a half-dozen features in the vein. 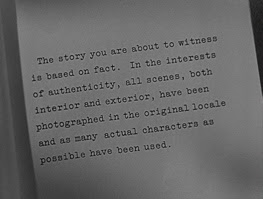 Like the other examples, Boomerang! starts with typewriter-serif font and a title averring that story content and locations are based in fact. (Although the actual town of Bridgeport was changed for a generic Connecticut everytown.) Also, like other examples, the film combines what is at times radical documentary narration (organization of shots and formal elements according to the logic of argument) with a more conventional fictional narration and noir style. Boomerang! points further toward the noir side of the equation (what Zanuck called showmanship), yet it, too, sees a tension between the documentary narration and the suspense fictional narration. Take the opening three shots. In the first, a remarkable 360 degree pan sweeps the center square of Stamford, where the film was shot: 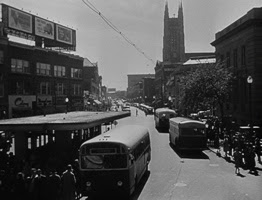 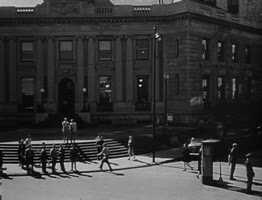 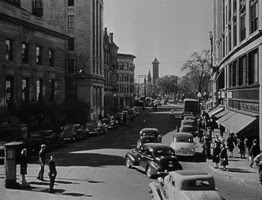 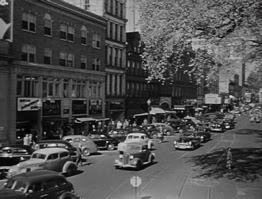 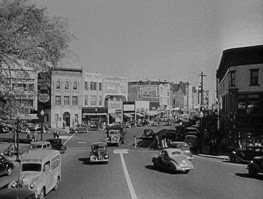 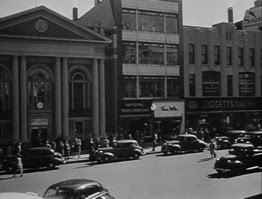 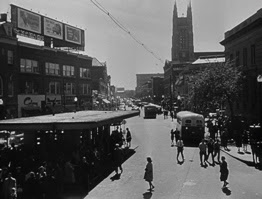 These harken back to what Tom Gunning and Andre Gaudreault have called the monstrating element in early cinema. In actuality film, this monstration took the form of a pan, the first widely used camera movement. (Think of Edison'sSearching the Broadway for Dead Bodies, Galveston, or Burning of Durland Academy). Now, forty-plus years later, the monstration signals a rupture in classical practice.

Shot 2 frames a clock (the time will be important later on), tilts down to frame a minister (who will be the victim) walking toward the foreground, then pans left to frame him more tightly and obscure the space frame right. 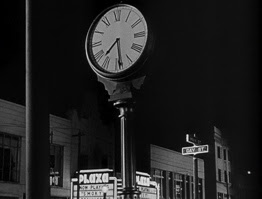 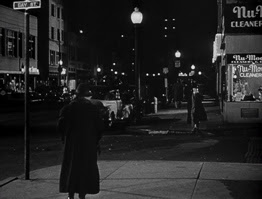 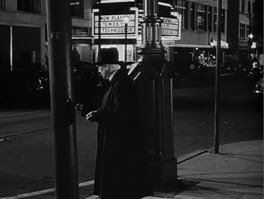 Shot 3 is tighter, and the close-up eventually serves to obscure the identity of the killer. (This use of close-up repeats in other Fox pseudodocs.) In these two shots, narration guides spectator expectations, narrative priorities, and the enigma of the plot. Rigorous narration sits side by side the radical monstration. 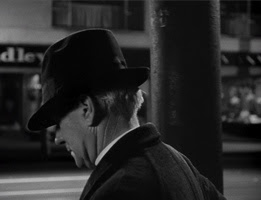 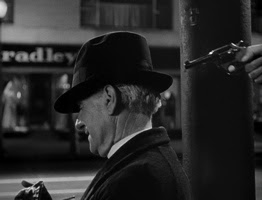 This formal tension gets replicated by an impossible narration. Throughout the spectator knows who the murderer (likely) is, but the voiceover to the end intones the official doubt of the case. Sarah Kotzloff has argued that The Naked City develops an ironic voiceover narration that undermines its own authority. Here, the undermining effect seems to go further. I'm inclined to read this narrational effect against and with the thematic message of the film. I don't think it's a stretch to claim some Sirkian system at play in a film that has to repress its leftist politics, only to eat at its own truth systems from the inside out.

ADDENDUM: Sharp eyes will note the the movie theater marquee behind the minister advertises Smoky, which was indeed another Fox picture. In the comments, Paul asks about the 40s psuedodoc cycle, and I try to answer him.
Labels: 1947 project classicism/post-classicism fake documentary film theory

Anonymous said…
I wasn't familiar with this film or six-film cycle you're talking about. What are the other five?

Also, do you have a sense of whether the people behind these films were consciously inspired by the success of Open City?
10:26 AM

Chris Cagle said…
The core of the cycle is the Henry Hathaway trilogy (so to speak): House on 92nd Street, 13 Rue Madeleine, and Call Northside 777. In addition to these and Boomerang!, Fox made Kiss of Death and Panic in the Streets in pseudodocumentary style, and in general incorporated documentary footage and realist style in unexpected places.

Hellinger/Universal put out the most famous of the cycle, The Naked City. Louis de Rochemont went on to produce independently the social problem pseudodocs Lost Boundaries and Whistle at Eaton Falls. I may be overlooking a title or two, but essentially the cycle was limited in its run.

The neorealism question is a bit vexed, since I'm not sure historians have answered the influence question in a satisfactory manner. If you read the trades there was definitely awareness of neorealism in the waters of the postwar years. That said, House on 92nd Street was made in 1945 and conceived before Open City. It's likely that Zanuck - in addition to wanting to exploit Fox's Movietone newsreel division - fell back on the same producerly instincts that guided his "headliner" cycle at Warner Brothers in the early 1930s.
12:34 PM