I'm still exploring the "snapshot" dimensions of the 1947 project. For instance, looking at budgets from 1947 films allows me see both product differentiation (different genres and prestige levels got different budget allocations) and system similarity (studio filmmaking systematically minimized expenses that later would explode; technological constraints required expenditures that would later be minimized). To take the example of RKO, I chose three films and charted out exactly where the budget money went: 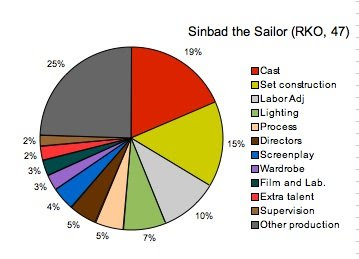 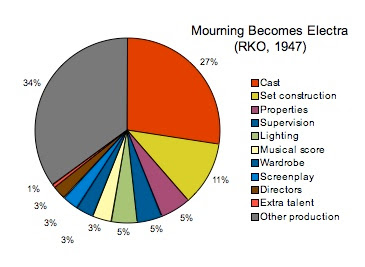 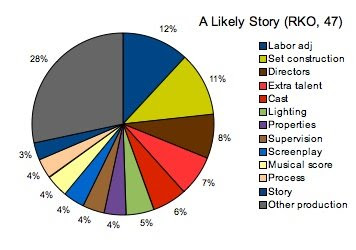 These show the top expenditures, by category - minor categories, of course, add up to a substantial portion, between a quarter and a third of costs. Note that these are relative budget comparisons, not absolute. The direct-cost figures for the budgets are as follows:

Mourning has twice the running length of A Likely Story and I would not be surprised - given its prestige, independent production and long take aesthetic - if it had a higher shooting ratio, as well.

But perhaps the biggest lesson is how much lighting costs in studio filmmaking. I have no idea how much it costs now to light a film, but the relative portion of lighting costs must be miniscule in comparison.

Pacze Moj said…
Very interesting. I suppose you'd have to do a lot of these to find out, but do you think there's a certain, somewhat constant, aspect of production that translated into financial success: is there a pattern for the top-grossing films of 1947 in how they spend their budgets?
8:33 AM