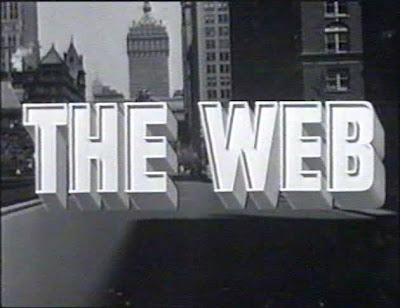 Once again, a documentary-inflected opening - a tracking shot taken on a Manhattan street.
As I've alluded to in other posts, noir as an idea tends to impose a mythological consistency on top of divergent generic content. That said, The Web (Universal, Michael Gordon) encapsulates key elements of noir fiction that formed the backbone of film noirs: the petit bourgeois detective figure on the right side of the law yet sucked into illegality despite his integrity; the critique of moneyed classes and interests; and the sexual repartee as power play between the detective figure and the femme fatale. Here, the detective figure is actually a small-time lawyer (Edmund O'Brien), but the narrative pattern is the same as the detective story.
I find the film instructive for what it says about production values in 1947. Compare a shot from Gentleman's Agreement... 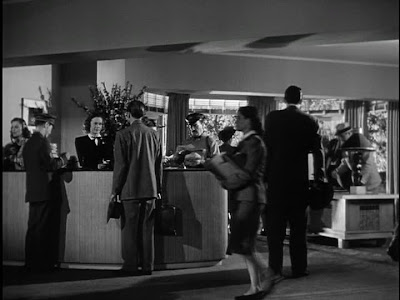 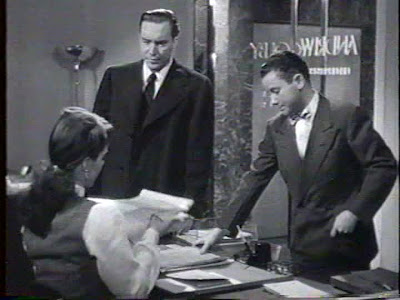 Both are trying to visualize the same thing: the milieu of the upscale, modern Manhattan office. Both use white-washed studio-set walls with occasional furnishings (doorframes, plants, lamps, signs) to give the illusion of a more luxurious decor. But Gentleman's Agreement uses not only a more complicated scene coverage but also a lighting scheme/lens choice that gives the illusion of depth and of a sense of space. The difference reflects the gap between the high A and the near-B. Universal was upgrading itself at this point, sometimes with stylistic verve, but here it could put more emphasis on script than shooting and in any case had difficulty competing in the same leagues as Fox.
That is not to say that cheapness was merely simple. Much as in David Bordwell's description of classical blocking, the arrangement of characters in the frame communicates the narrative subtext of the scene, in which the romantic pairing between the Ella Raines and Vincent Price characters gets interrupted by the confidant who introduces the plot line of an embezzler released from prison. Raines remains in the background, outside of the dealings between the men, yet clearly affected and concerned by them. This will foreshadow her position in much of the narrative. 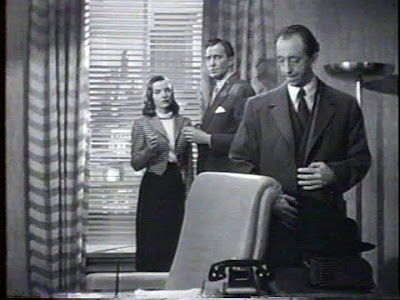 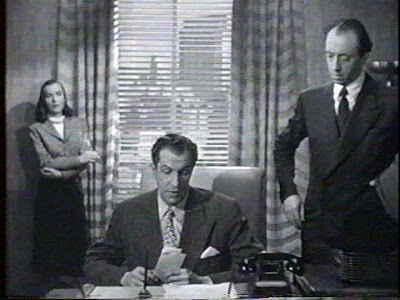 Which is to say that The Web is a highly classical film and conventionally so. Even the lighting effects seem akin to counterparts of the 1930s, as when Price gets a north light in a moment of sinister action. 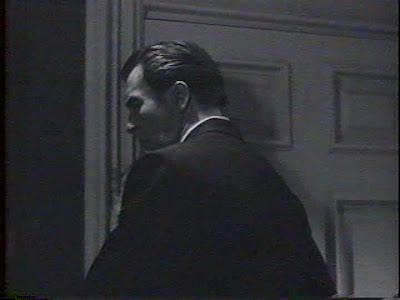 So while I started off by noting that The Web perhaps fits the ideal type of noir, I would have to except the visual style.
Labels: 1947 project cinematography narration