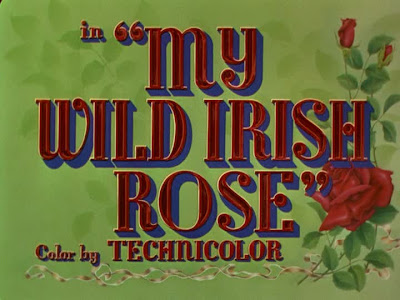 I normally don't program seasonal screenings at home for every occasion, but My Wild Irish Rose (WB, David Butler) has been sitting on my shelf waiting to be viewed, and with St. Patrick's Day upon us yesterday I figured it was a good time to watch. And, wow, the film was packed with as much Irish-themed kitsch as you could imagine. 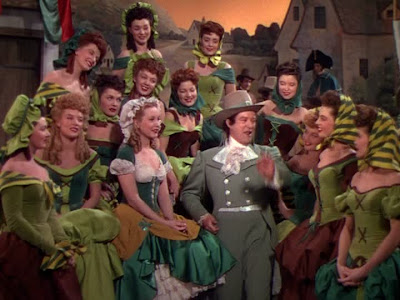 To my knowledge, Warners wasn't a studio known much for their musicals in this period (there seems to be only one other example from 1947). And, too, the studio produced only one other color feature in this year - a low number compared to other studios, even given the relative rarity of color in the 1940s. So it's arguable that the film lacks a clear anchoring to a studio house style, either generically or visually. Its cinematography is more in line with the MGM high-key look, a fact in stunning relief for me having just seen the underlit Forever Amber. 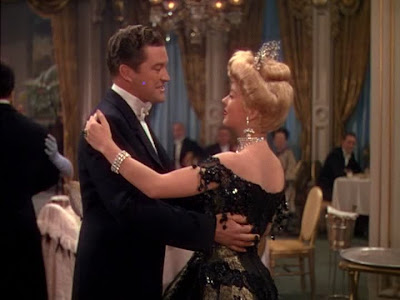 Also, like the MGM musicals, the mise-en-scene combines a minimalist background set design (usually in gray or neutral shades of brown) with a candy-pastel color palette. Particularly when the effect is to caricature the nostalgic version of Americana. 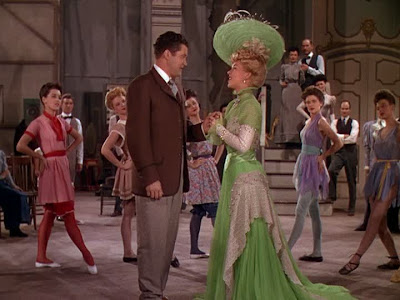 Generically, on the other hand, the film is not an integrated musical but rather a musical biopic very much in the 20th Century-Fox vein, with a fin-de-siecle setting and a protagonist based on a famous songwriter/singer. In this case, Irish songwriter Chauncey Olcott (Dennis Morgan) struggles his way to fame and, secondarily, to requited love. Lillian Russell (on whom Fox based an Alice Faye biopic) even is a key character. As with the Fox films, the narrative structure is more peripatetic than goal-oriented.
Also, the film borrows from 1946's The Jolson Story (Columbia) in its narrative of ethnic generational conflict (downplayed a bit) and in the extensive use of blackface. Perhaps this is impressionistic, but I found the use of blackface here to lack even the historical or thematic resonance that it serves elsewhere and to feel like a throwback to an earlier cinematic period. (The Jolson Story is ideologically suspect in a lot of ways, but at least it is trying to interrogate identity.) I have not come across much use of it in 1947 yet, and it will remain a worthy point of inquiry to see what future viewing holds. 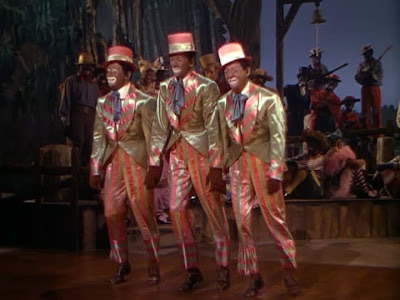