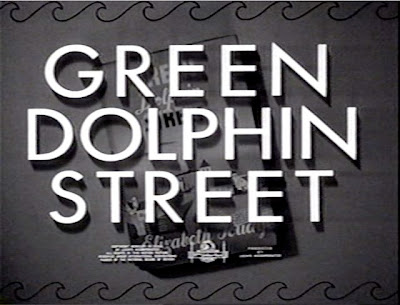 “It would be an unhappy world if the only love was the love of youth.” Green Dolphin Street (MGM, Victor Saville) foregrounds its status as literary adaptation, from its book cover title to its sprawling narrative development, and it's remarkable when a film delves so far into a literary “tone” yet presents its theme so explicitly in the dialogue. Or perhaps this thematic obviousness was common to the literary prestige films, a distinction from more generic fare.

In any case, Green Dolphin Street is a prime example of the older type of classical Hollywood prestige film that continued alongside a newer, emerging prestige film. The film takes an everything-but-the-kitchen-sink approach, with a convent... 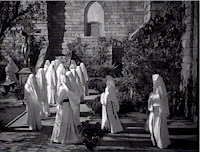 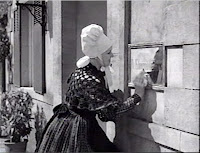 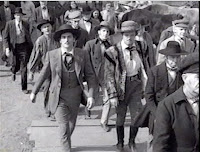 and the spectacles of threatening "natives" and epic earthquake: 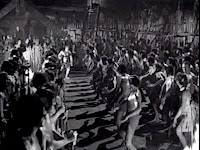 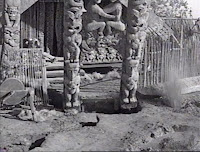 How much is in the source material, I do not know, but it seems a clear strategy on MGM's part both to wed the film's spectacular appeal to an "epic" historical scope, while hedging the studio's bets.

The style is safe, too, with an update of the "quality" cinematography that defined the late-30s "golden age" production. See for instance, typically masterful but unobstrusive use of backlighting to separate foreground from a complicated, active background: 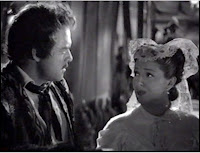 Expressionism tends to come in only for highly motivated occasions (the natives get restless), but a couple of tics signal the impact of more adventurous and show-offy style (which I call stylistic mannerism). Take, for instance, the Tollandesque ceiling shot or the Sirkian disarticulation of space through use of mirrors: 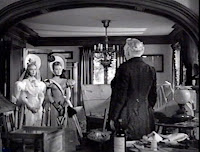 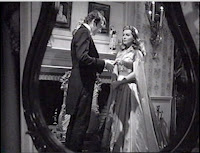 Finally, Bob Rehak's work has me looking more at classical effects and process shots, and I can't find a better example of glass painting compositing than the fake Mont St.-Michel-ish convent. 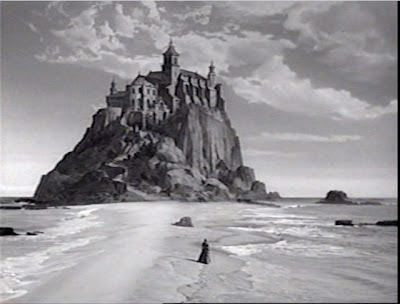 In short, this is hardly the first (or even 30th) 1947 film I'd recommend for viewing enjoyment, but it's precisely the sort of film that I started this project to watch: typical but interesting in the way it follows received practice in a period when filmmaking's changes were starting to hold sway on even the most conservative of studios, projects, and genres.
Labels: 1947 project melodrama prestige film

Bob Rehak said…
That's a nice matte painting, Chris, strongly reminiscient of the famous Xanadu shot in Citizen Kane (one of my favorite FX frames from Classical Hollywood, it features stop-motion-animated construction vehicles at the bottom). I know MGM's in-house FX team later came up with the groundbreaking work on Forbidden Planet, perhaps the first "prestige" SF film. Would be interesting to trace the genealogy of this shot through the technician/departments involved -- I often wonder about the crossover between "invisible" and "visible" FX in the years of the Studio High Style.
7:17 PM