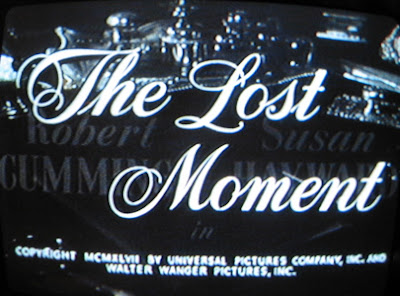 Walter Wanger may have held an image as Hollywood’s sophisticate and as a “serious” producer, but oddly enough his films were often especially generic. (Dennis Bingham has made this observation; additionally, Matthew Bernstein’s biography of Wanger is an excellent study of a producer both typical and unusual.) This tension is perhaps best illustrated by The Lost Moment (Walter Wanger/Universal, Martin Gabel). It is an adaptation of a Henry James story, “the Aspern Papers” and like other quality literary adaptations (How Green Was My Valley, I Remember Mama), make extensive use of a literary-style 1st person voiceover narration. Generically, however the film is a Gothic film shot in a manner not too dissimilar from horror or gothic films of the time. A couple of qualities distinguish this one 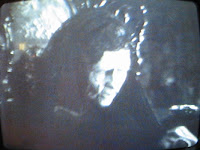 from other gothic films of the 40s. First, it is a male-centric gothic; I’d noted that Two Mrs. Carrolls subverted the traditional focus on the heroine’s subjectivity, but in the Lost Moment there is no woman marrying into or entering a family tinged with uncanny. In fact, the film contains little thriller element, just a sense of supernatural events. Second, the Jamesian quality shines through the adaptation, at least in the narrative development. It’s as if the story not only wants to activate Barthes’ hermeneutic code, but also strips away other codes so that the enigma functions in its purest form. Films like this make me wish I was a better narratologist; at first blush, the effect of The Lost Moment is not too dissimilar from certain modernist treatments of the enigma (or David Lynch for that matter), yet we don’t apprehend the film as resisting narrative drive in the same way. 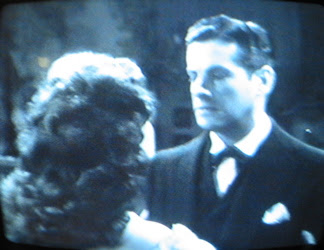