If for nothing else, I'm going to appreciate this project for the range of fonts in the titles. Here, Tycoon (RKO, Richard Wallace) is established from the start as one half historical drama (diagonal line, slight ballooning), one half Western (blocky serifs). Well, it's not a literal Western - it's set in South America - but it's a John Wayne vehicle and transposes the settlement theme into a narrative about railroad construction. 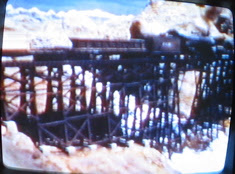 In many respects it's the typical dual-focus narrative that Rick Altman identifies, reminiscent of adventure films like Only Angels Have Wings. Wayne is having to construct a railroad tunnel while evil tycoon Alexander (Cedric Hardwicke) is skimping on materials. Meanwhile, Alexander's daughter (Laraine Day) falls for Wayne, and must come to terms with the class and lifestyle differences. I'm continually fascinated by the strange cross-identification of class politics in films like this. The film presents (presumably for its female viewers) a spectatorial identification with the aristocratic woman whose battle against aristocratic strictures stands in for the viewer's dissatisfaction with actual social and sexual mores (think Jezebel). In turn, the protagonist's choice of the rugged working man as an object of desire validates the working class as more authentic. Sexual difference plays as class difference. 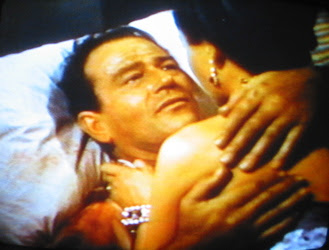