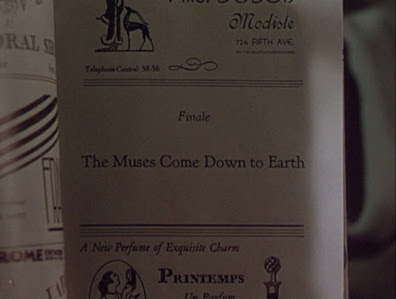 Imagine Xanadu, only without roller skates and with Rita Hayworth in the Olivia Netwon-John part. Down To Earth (Columbia, dir. Alexander Hall) itself was a sequel to a Here Comes Mr. Jordan (1941). Danny Miller (Larry Parks) is putting on a Broadway show about Greek muses who fall in love with American aviators. Terpsichore (Hayworth) is watching from heaven and gets upset at the characterization of the lead in the musical. She comes to earth to change the musical to something more edifying. Hijinks ensue.

Rudolph Mate's Technicolor cinematography is vibrant and saturated, and part of the pleasure is just the vitality of color in the mise-en-scene: 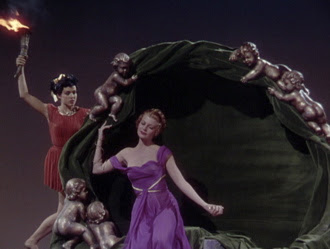 But the real entertainment value lies in Hayworth's performance. It's not a meaty role (Terpsichore frankly is a ditz), but Hayworth has a star presence which is knowing, immediate, yet aloof. I kept thinking of Richard Dyer's essay on Gilda and Hayworth's "resistance through charisma." Throughout, her dancing style exudes sensuality and exceeds the regimented choreography of the other characters. 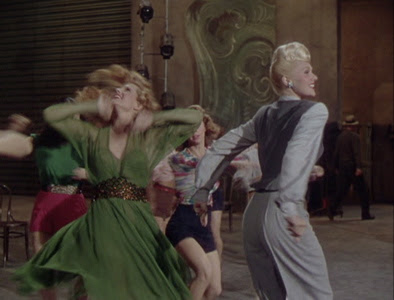 The bit parts are fun, too. Geogre Macready reprises his Ballon character from Gilda (also a Columbia pic) as Mannion, the ruthless casino owner who walks about with his cane.

For my scholarly purposes, I'm fascinated by the thematic self-consciousness of cinematic taste formations. Much as Sullivan's Travels sent up Capra and Vidor, Down to Earth is a sly putdown of the Powell-Pressberger and Rank Studio films.
Labels: 1947 project sociology of taste