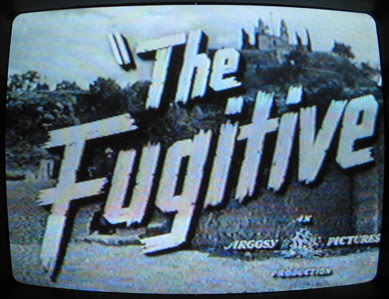 The Fugitive (Argosy Films/RKO, dir. John Ford) is such a fascinating historical relic that I wish I knew more about it. The opening voice-of-God narration, intoned squarely in between the styles of How Green Was My Valley and the postwar pseudodocumentaries, pronounces that

The following photoplay is timeless. The story is a true story. It is also a very old story that was told in the Bible. It is timeless and topical, and is still being played in many parts of the world. This picture was made in our neighboring republic, Mexico, at the kind invitation of the Mexican government and the Mexican film industry. The locale is fictional It is merely a small state, a thousand miles north or south of the equator. Who knows?

I'm not sure in what capacity the Mexican industry was involved, but director Emilio Fernandez and cinematographer Gabriel Figueroa, whose work is perhaps best known in the seminal Mexican melodrama Maria Candelaria, worked on The Fugitive as assistant director and cinematographer. The grafting on of the melodramatic form here is palpable.

A little more inscrutable are the films’ political leanings. Adapted from Graham Greene, the film retains some of the author’s central thematic explorations of religion and political struggle. Another layer of America in 1947 gets added on top of this, though, and the result is an anti-Stalinist allegory that sits uneasily aside a film that wants to champion the poor as a political mass. The Americans for Democratic Actions mentality clashes with the Good Neighbor policy espoused by the film.

The cinematography is both stunning and formally unexpected. This shot/reverse shot pattern, for instance, is abstracted into distinct spatial planes in order to highlight the religious iconography of their compositions: 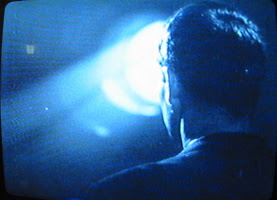 The film has some nice Wellesian touches, too, like organ grinder whose music downs out all the dialogue. It’s fascinating to see how the Orson Welles/Carol Reed/Graham Greene mini-genre proliferated internationally.

I apologize for the lo-fi telecine-style captures from VHS. I'll have to see if I can get a better setup for this sort of thing. I'm grateful, at least, that local video stores - here Beaux Arts Video on 10th and Spruce - keep a good stock of out-of-print VHS tapes.
Labels: 1947 project ideology