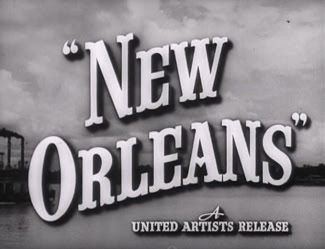 Talk about lighting for whiteness... 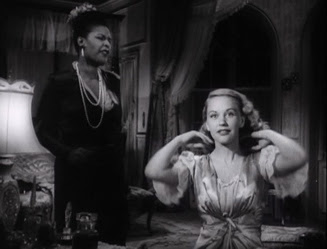 New Orleans (UA/Jules Levey, Arthur Lubin) is part musical, part sentimental historical film about the birth and spread of jazz. Generically, it has a lot in common with the Fabulous Dorseys; the sense of historicity is somewhat remarkable in these films and something I suspect hasn't been discussed in its positivity. (It's not that commercial films don't understand their narratives historically, but often these choose between reification of History or postmodern evacuation of history; I prefer the more traditional historiographic underpinnings of these 1947s, which is a surprising result.)

Which isn't to say that New Orleans' understanding of the history of jazz isn't problematic. Undoubtedly much of the appeal today (the film got a Kino Video release for some reason) lies in the performances, the on-screen musical domination of both Billie Holiday and Louis Armstrong. It's to the film's credit that the musical format allows them uninterrupted screen time. I'm not sure this fully compensates for the pain and sadness that I experience watching Holiday in Butterfly McQueen drag as a maid character. 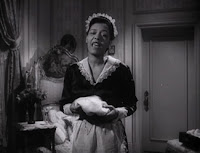 The next shot reveals a motif in the film. 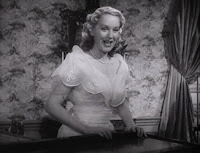 Throughout, the film dissolves from a jazz/blues/black performance to a chamber music/operatic/white performance. 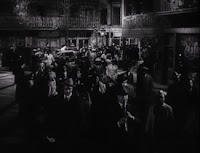 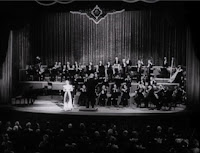 The theme, that is, is also about whiteness, and gives a variation on the vernacular modernism narrative (modernity and modern culture break the shackles of traditional social arrangements and sexual strictures). Here, black musical culture becomes the site of white intergenerational rupture and of female agency.

This all has me thinking about the way vernacular modernism has operated in other national contexts, the way Andrew Higson and Geoffrey Nowell-Smith have persuasively argued that in the British context, American cinema triangulated as a third term introduced into a rigid two-term class structure and gender role-assignment. Nowell-Smith credits Hollywood's incorporation of an immigrant public into its rhetorical structure. Indeed, but it's worth noting that the triangulation structure internal to American culture is present in the films. The ease of transatlantic triangulation may stem from the the black-white relations and narratives of sexual emancipation already built into the films.

Finally, since regular readers will know my ongoing documentation of city documentary imagery in these films, I have to say that such imagery appears only in one shot, oddly enough not of New Orleans, but Chicago: 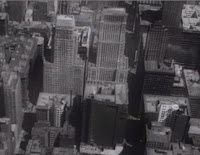