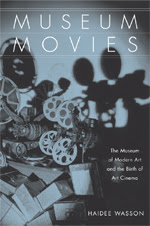 There seems to be a new strain in scholarship addressing the social history of cinema through a detailed institutional historiography. I’d reviewed Peter Decherney’s Hollywood and the Cultural Elite already, and have wanted to highlight Haidee Wasson’s Museum Movies (University of California Press) for some time here. Wasson’s work is a valuable, thorough study of the Museum of Modern Art’s film library; she places its genesis in the discursive and ideological shifts in ideals of art and museology in the 1920s and 30s, as well as the specific institutional struggles among key parties in the Museum, and between the Museum and foundations and film studios. As she writes in the introduction,

This book frames MoMA’s film department as an institution of exhibition, one that was shaped by archival and museological structures… I therefore seek to build on the assertions made by a range of scholars that film exhibition is an important category for thinking about the unfolding significance of cinema as a mediated cultural site, wherein the contests of class, gender, and race are being perpetually played out. I seek to conjoin this basic insight with the recent work of those seeking to analyze the politics of leisure and moral reforms as elaborated through debates about cinema, museums, and urban life. (27).

Indeed the book does balance these two impulses. Institutional history – which unearths and interprets the records, memos, publications, and speeches of Iris Barry, John Abbott and MoMA directors or trustees – is followed by a look at the actual programs of the museum’s circulating film programs. It is often difficult to argue persuasively for a paradigmatic shift in cultural perception and in the notion of art - shifts like that are easy to overgeneralize and overstate - but Museum Movies is persuasive in just that task.
Labels: book reviews cultural history