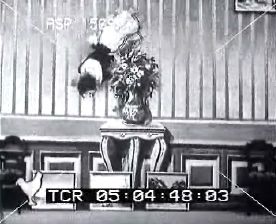 I have never relied much on pedagogical films, i.e. films which themselves lecture on film studies. However, designing my syllabus this time around, a colleague had reminded me of a Noel Burch film/TV series, Correction Please, which really is a wonderful explanation of the development of narrative storytelling in cinema. Unfortunately, the film has never had a video release and only a smattering of university archives, departments and libraries have a closely-held copy. So far, I've been unable to obtain a copy anywhere.

The larger question I have is: what other useful pedagogical films might I be missing. Burch may well be an unusual case, as theorist and filmmaker who also took on the mantle of popularizing an genre overlooked in the larger film culture.

For that matter, are there any useful multimedia educational materials worth using? For all of the supposed media savvy and literacy of pop culture scholars, there's some pretty dire stuff I've seen. Then again, things can change a lot in a short time.

Anonymous said…
I'm not terribly keen on The Celluloid Closet but I can see how it might be useful, especially if one were, say, teaching an intro level film class...

Would Visions of Light qualify as a "pedagogical film" in your estimation?
12:14 PM

Anonymous said…
Not necessarily for film students -- but for anyone that is going to study images: If you can find it, I love John Berger's BBC miniseries, "Ways of Seeing." A common misconception (when people hear about it) is that it's based on his venerable book. But the book is actually based on the miniseries.

I would second that "Visions of Light" is a useful introduction for students to the concept of what a cinematographer does. It makes a nice companion piece to some of the interviews found in the book "Masters of Light" (U of Calif press, I think).
1:42 PM

What's more popular here are ethnic studies-related videos:
Chop Socky: Cinema Hong Kong, BaadAssss Cinema, and
The Bronze Screen (I think Chop Socky is the superior film of the three). Also, some of the audio commentaries on the "Treasures from American Film Archives" sets can be useful for silent film.

This is probably way out of an intro class scope, but for acting technique there's a pretty interesting video (out of print, but easy to get) that the student actors watch:
"Michael Caine on Acting in Film." It's surprisingly interesting for explaining the differences between stage acting and naturalistic film acting.
5:32 PM

Chris Cagle said…
Thanks for the suggestions!

Celluloid Closet is the only one I've seen. I'm actually going against Temple tradition, apparently, by not including Visions of Light in my intro syllabus. So should take a look at it, post haste. The Michael Caine video sounds great, as well, because not being the theater type, I don't always have a good vocabulary to talk about film acting.
7:42 AM

bewildering said…
I would add the companion piece "The Cutting Edge: The Magic of Movie Editing" (2004). directors & editors talk about their films and the development of editing and film history. This was made as a companion, or at least a response to 'Visions of Light' which if viewed on its own gives far too much weight to the image. The history of films is the history of editing. Without editing there would be no films. This is a must see documentary and really far superior to 'Visions of Light'
6:05 AM