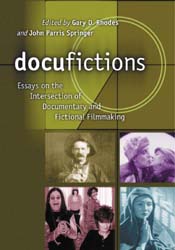 Since I'm currently trying to finish a paper on 1960s pseudodocumentary, my research has led me to some of the current scholarship on mockumentary and other documentary/fiction hybrid forms. There's not a lot out there yet, though I imagine there will be more. Docufictions (Macfarland Publications, 2006) scores points by being the first volume, to my knowledge, to consider hybrid forms in a systematic way. Its essays are eclectic, ranging widely in methodology and rigor, but the volume probably succeeds on its terms: it establishes docu-fiction as an object of study worth consideration against the tendency of narrative and documentary scholars each to consider hybrid forms outside her/his purview; the hybrids have become too popular and widespread to treat them as mere exceptions. At the same time, the book has the historical scope to suggest that much nonfiction filmmaking of the past - including examples of the documentary canon - are productively understood in the context of hybrid form.

Beyond the admirable interventions, however, I found myself a little disappointed with some of the actual scholarship in the book. Sometimes the methodology seemed too on-the-surface for my taste, not removed enough from the kinds of smart observations that a journalist or eductated viewer might make on her own. Gerd Bayer's essay on mockumentary, for instance, is structured around an untheorized notion of artifice; among other problems, this leads him to the conclusion (problematic in my view) that A Mighty Wind "proceeds without overt stylistic references to the genre of documentary film making and its claims of veracity." Jared Green's essay on Flaherty's ethnographic gaze seems more theoretically sophisticated at first pass, but at the end seems to want to second Trinh Minh-ha's "there is no such thing as documentary" and the poststructuralist critique of objective cinematic representation while at the same time ascribing truth value to written expository material. (If claims of objectivity always misrepresent the "Other," why are written accounts free of that problem?) And Mark Bould's essay jumps from science fiction, city symphonies and actuality without spelling out why these genres are being considered together. Even the most suggestive of the essays - John Parris Springer's contribution on early cinema and Donald Levin's on the industrial film - share scholarly ground with previous work.

This volume is strongest in getting us to look at historical texts in new light. Flaherty, the city symphonies, and (Louisiana Story, an excerpt of which I'm showing in intro next week, is ripe for reconsideration, by the way.) And for all its obviousness, I'd overlooked the example of Citizen Kane in my own thinking of the topic. Docufictions is a worthy starting point, but one that suggests there's still a lot of valuable work to be done in explaining and explicating documentary-fictional forms.
Labels: book reviews fake documentary

Anonymous said…
Wow, this sounds like it's right up my alley (and if my SCMS paper gets accepted something I'll need to read cover to cover), even if the scholarship is a bit flat.
9:13 PM

zoe p. said…
You know, I took a look at this and thought it was weak.

But I'm glad it got you thinking about Kane as history and biography as documentary . . . this is something my diss I am forces me to approach and I feel I have a million ways in, but no where to go . . .
2:48 PM

Anonymous said…
I disagree greatly with zp. Like any anthology, some essays are perhaps stronger than others... but to label the work of some of these great scholars (Mark Bould, Michael Lee) with a single word is unfair
9:21 AM