The Trouble With Women 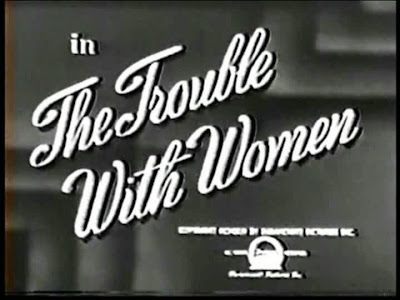 It's been tougher for me to track down the Paramount films from 1947, but it is seeming like they tend to specialize in genre films that would not be out of place five or ten years earlier: light comedies, action-adventure films, and "exotic" romances.
The Trouble With Women (Sidney Lanfield) would seem to confirm the notion of the Paramount as a stuck-in-the-30s studio, ignoring the broader changes of postwar aesthetics and ideology in Hollywood films. Whereas other comedies seem to update the screwball formula, The Trouble With Women reprises Bringing Up Baby, with Ray Milland in the bookish Cary Grant role: 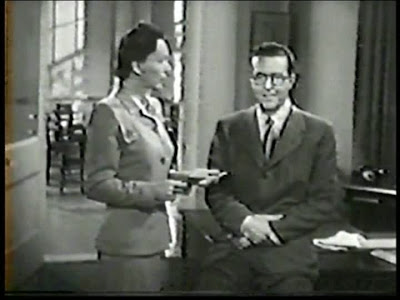 The twist, though, is that Milland's character, Prof. Sedley, is a psychoanalyst famous for his counter-intuitive and misogynist theories of female sexuality. To my mind, this points to one of the recurring conventions of the late 40s light comedy: a social satire that cuts both ways. In this case, the film sends up both psychoanalysis and the Babbitt-like reactions of the townspeople to Sedley's ideas.
This dual satire plays out some, too, in the depiction of journalism, though I'm not sure the film departs much from the screwball conventions in this. The Teresa Wright and Brian Donlevy characters are journalists trying to write an expose of Sedley; in the process, they expose mostly their own lack of humanity, but they are still correct in their views. 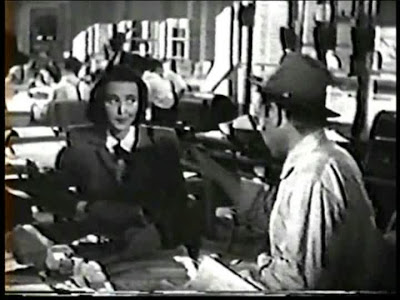 Donlevy's McBride tries to undergo a social class transformation in the film: 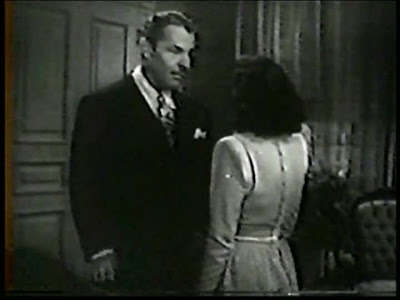 What's striking to me is how the film is poised right at the historical moment of a class transformation of the journalism profession. There are a number of films of the late 40s that seem to be coming to grips with a dying petit bourgeois class.
Labels: 1947 project psychoanalysis public sphere

Unknown said…
"To my mind, this points to one of the recurring conventions of the late 40s light comedy: a social satire that cuts both ways."

"There are a number of films of the late 40s that seem to be coming to grips with a dying petit bourgeois class."

What are some other films that fit a similar mould?
11:16 AM

Chris Cagle said…
A good example of the social satire: Presenting Lily Mars, which I've blogged about here. Or Dear Ruth, which I've covered in the 1947 blogging.

For the second, Park Row is a terrific example.

I hope to work these hypotheses into something publishable at some point, so I'm holding off on a more sustained argument here.
11:21 AM