I have been rewatching Humoresque for an essay I'm working on. I must have seen it the first time before I ever watched The City, because this time around I was completely caught off guard by the montage sequence a third the way through: 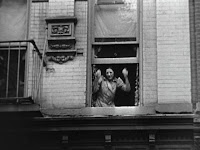 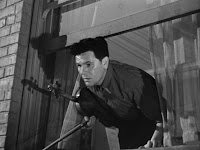 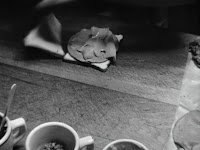 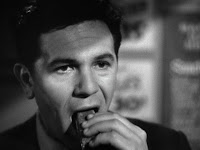 Not only does the film recycle documentary footage, seemingly at first as B roll, but the montage sequence maintains the original intellectual montage, only integrating John Garfield's character into the parade of anonymous social types of the "urban worker."

I have long held a suspicion of explanations of Hollywood's postwar documentary-infused style as being merely the holdover from wartime documentary/propoganda/newsreel practice. Yes, the war does have a catalyst effect on the public sphere aspirations of Hollywood, but those aspirations stretched wider than is often acknowledged. Grierson and Ivens wrote for American Cinematographer, and film critics judged Hollywood narrative against the seemingly new nonficiton language. The City, too, suggests that government-documentary intellectual montage could be as important as superficial stylistic markers like the handheld camerawork or grain of 16mm photography. It's all the more stark appearing in a film like Negulesco's, a highly mannered drama with lush production values. (Standard master-shot scene analysis is pretty rare, for instance.)

The other point to make is that this is merely an unusual instance of a typical practice. At the World Picture conference, I saw a paper (by Chelsey Crawford, OSU graduate student) that raised the interesting question of how one understands quotation and allusion in cinema. I mentioned afterward the particularity of nonfiction quotation, but the Humoresque example raises another practice: Hollywood's tendency to reuse or borrow footage in a seamless integration of story. It is quotation without acknowledging it as such. From my understanding wartime filmstock shortage put some demands on studios to do this, and of course the bare-budget Poverty Row studios always had an incentive.

Filmmakers did not stop lifting footage, of course. What changed was a sense of historical archive for Hollywood films. The underlying footage all of a sudden became visible. Plagiarism became quotation.

Wild River's integration of documentary footage of river flooding might be an interesting in-between case, a moment of transition between two representational regimes. It's not Humoresque's use of The City, nor is it The Limey's use of Poor Cow.
Labels: documentary-fiction film style montage