The Bachelor and the Bobby-Soxer 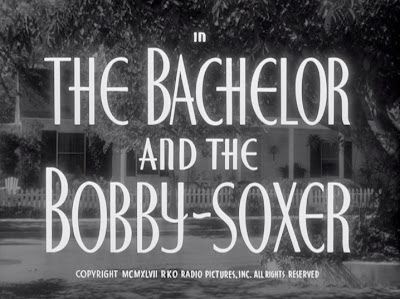 Nicholas Musuraca was director of photography on The Bachelor and the Bobby Soxer (RKO, Irving Reis), but what an aesthetic universe apart from Out of the Past! True, there is some interesting shadowplay on the minimal interior sets 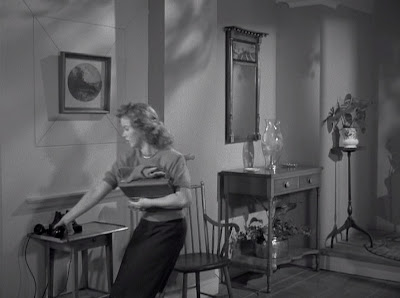 ... and some occasional lighting setups hinting at the romanticism of Out of the Past: 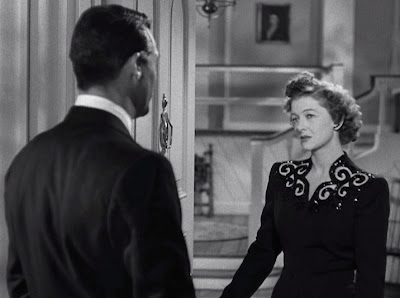 Generically, though, the film is almost an ideal type for the light comedy that RKO specialized in for their mid-A productions. High-key, star-driven, and a variant of the screwball formula, only overlaid with more traditional social mores. (Paramount's Dear Ruth is comparable, though perhaps a little more "sophisticated" in its connotations.) In this instance, Richard Nugent (Cary Grant) is the eponymous bachelor, an artist whose profession immediately stands in for bohemianism, and Susan Turner (Shirley Temple) is the bobby-soxer who has suffered a teenage crush on Nugent, to the chagrin of her older sister and guardian, Margaret Turner (Myrna Loy), a rationalist judge. Complications ensue of course, and soon Nugent is "sentenced" to dating Susan to cure her of her crush. 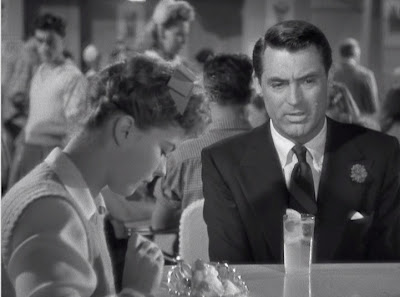 The oddness of the screenplay is that perversity abounds – the intergenerational romance, the intimations of both father and mother substitutes, the implication that the law is requiring a relationship with a teenage girl – while the film plays it all straight. It is not the matter of a subtext or of containment, as in the 30s screwballs. Rather, Bachelor and the Bobby-Soxer cites the 30s template only to rely on the insistence that impropriety is illusory. Temple's star image in particular militates against sexual desire, and it's understood that her girlish crush can be only that – an innocent delusion devoid of sexuality. For his part, Grant's star image paints Nugent as a philandering bachelor, but the age and distance suggests that this is how Grant "used to be." In all, the film seems most conservative (and dated) for suggesting that teenagers are devoid of sexuality and independence - the pretense they have to being adult (again, comparison to Dear Ruth is instructive) only underscores their ultimate innocence.

Of course that's an ideological assumption that the 50s and 60s melodramas (Written on the Wind, Spendor in the Grass) would have a field day with.
Labels: 1947 project comedy melodrama