The Unfinished Dance (Henry Koster) is pretty much the intersection of two specialties of MGM: the integrated musical and the sentimental (melo)drama. The intersection itself appears in other of the studio's output, notably Meet Me in St. Louis. Unfinished Dance shares a star – Margaret O'Brien – with that film but otherwise emphasizes the qualities MGM was known for outside of its musicals: sentimentality, Americana, and the cult of childhood. Even the mise-en-scene immediately communicates the wistful relation to a middle-America that was rapidly receding in the postwar years: 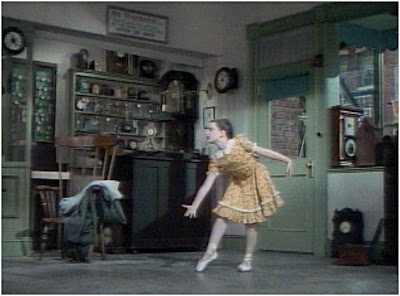 (Photo: The Margaret O'Brien website)
One reason that the sentimental drama has been interesting me more and more is that while the scholarship, feminist and otherwise, on film melodrama certainly outlines why a film like Unfinished Dance is melodramatic, it does not fully capture the nexus of historical past, childhood trauma, and national identity that seems to recurrent in the late 1940s. I don't have an argument about this confluence yet, but the repetitions make me want to dig deeper and explore them.

One trouble is, naturally, that these films are so easily recuperable to camp, aesthetic dismissal, or historical distance. The narrative of Unfinished Dance - a child dance pupil becomes fixated on a ballerina and ends up crippling her rival - is a hairline away from The Bad Seed camp territory. And I've heard the argument that MGM, particularly the Freed Unit, approached their Americana with a camp sensibility to begin with, so we shouldn't necessarily take the sentiment at face value. Yet, presumably many viewers did, or at least the sentiment resonated with them in non-ironic fashion.

As a side note, once again we have a triangulating class ideology (ballet is seen as superior to stage musical dancing, except that it's not) typical to classical Hollywood. But once I say that, I wonder what typical means. Film scholars in humanities usually have nothing to do with content analysis (major exception: Bordwell, who counted romance narratives in his CHC sample). I would like to see a content analysis of class-ideological narrative structures.
Labels: 1947 project class melodrama national cinema